This chicky that I have named “Little Red” is desperate for a place to lay her egg. I’m not sure how long chickens can actually “hold it” but apparently they can for awhile. 😉 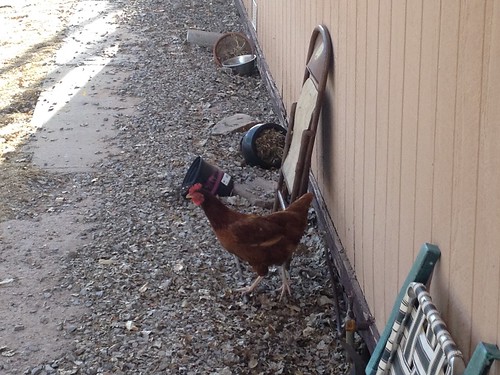 Poor little thing. She was trying to get busy on that coal-bucket nest when I discovered it. Apparently once they get that “gotta lay and egg” thought in their little birdy brains it is the ONLY thing they can think of.

I tried to distract her by taking down some special treats to the coop area, and it kinda worked. She ate a few pecks of oatmeal and then hopped into the coop. I was optimistic that she’d discover the nests in there are just as good. And just in case she simply HAD to have the bucket, I took it to the coop too.

Alas, no. She explored the coop, found it wanting and took off like a shot back toward the yard. I’d closed the gates though, so I thought ya know, maybe the effort will convince her to find an easier (coop) place to lay those eggs (coop) like the well fluffed nests of the chicken coop!!! Or bucket even if you must!

But a few minutes later I looked out the window and the crazy hen was running back and forth outside the fence trying various spots to stick her head through, and finding that her body wouldn’t fit. Eventually she gave up on that and flew to the top of the fence and over. Yep, sheeeeees baaaaaaack! 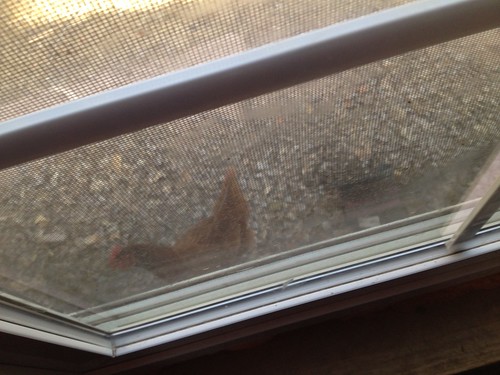 She has a good sense of geography though cause she keeps coming back to the exact same spot, but she’s so confused that the “perfect nest” was gone. She even attempted to go under the folding chair to see if that would do. 😉 I don’t think it did. 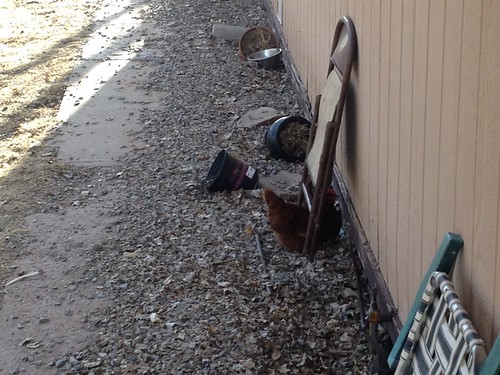 The saga continues… can’t wait to find out what becomes of that egg….