THIS is what I did today! 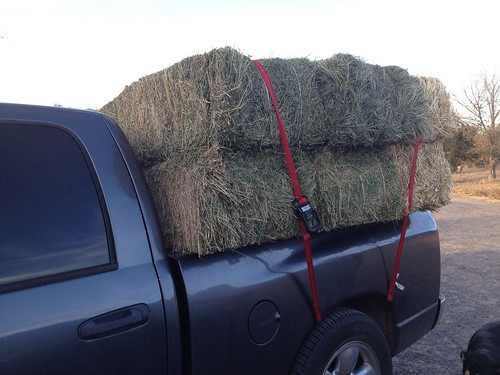 The thought suddenly occurred to me the other day that hay is “in” now and that I should probably get some to last our little goaties through the winter before the people who horde it jack up the prices for poor newbie people like moi who have no clue about wintering animals and have to buy the stuff out of season. 😉 Just kidding, I’m sure people aren’t really trying to be mean, but the prices on hay do seriously go up, and in my estimation they are high enough to begin with!

So I took the truck and the 3 older monkeys for a play date and a hay/straw pick up. I did not know before, but I do know now that the bed of a standard sized truck will hold 15 bales! It was quite interesting to see it loaded. We got 12 bales of hay and 3 of straw. Hay for eating, straw for sleeping! I also finally hunted down some Sweet PDZ which is a stall “freshener.” It helps dry things out and keep odor under control so that you don’t have to completely swap out all the bedding all the time. Allowing a bit of build up over the winter can keep the animals warmer. Or so I’ve read. 🙂

I also learned that if you plan on putting a tarp over the top of the load, bungee cords to hold down the tarp are advisable as well as straps over the top. We are now minus one tarp. It flew to freedom somewhere between Springerville and St. Johns, and finders keepers, I suppose. 🙂 My friend Rachael and I secured it ourselves, and you’d think between 2 grown women we could manage to tie down a tarp. *Ahem* We will be offering our load covering skillz to anyone interested for a nominal fee. 😉

Speaking of tying things down. I was reading up on laws concerning child restraints in vehicles and found out some very interesting things. First, while they keep on increasing the demand on parents about child restraints i.e. rear facing till 2 yrs, in a booster till age twelve and so on, that if a child is in any public transportation or a school bus they don’t even have to be buckled!! What?! I also read that if your vehicle is “too small” for the correct child restraints (car seats) you don’t have to use them, but at least one child has to be in one. Wait… what? Crazy! There was another one I thought was rather ridiculous, but I can’t remember it so I’ll just leave you in suspense! 🙂

On another note I took the popular Facebook grammar quiz thingy and for one thing it is completely put to shame by just about ANY ABeka grammar quiz and 2, I am a “grammar guru!” I only missed 2 questions and they were about the “i.e.” and “i.g.” which I got reversed. So I’m going to commence to use them more often so that I look amazingly brilliant and so that if I ever come across that quiz again I can be a grammar WIZARD!!! Ha ha ha ha!!

I changed Siri to the guy voice just to tease Stuart. 😉

Ella soaked her bed 2 nights ago as you may have read on facebook because she opted, without running it by me first, to wear panties to bed. I can neither confirm or deny that a towel is still on her bed and it hasn’t yet been changed. Actually I could… but I’m not gonna! 😉

Tonight for dinner I made pizza quesadillas and for dessert I made cinnamon/sugar quesadillas with cream cheese filling!!! 🙂 It was my own invention and it was nuuuuuuuumy!

I started our family on an ACV regimen yesterday. For the kids I mixed a tablespoon of the vinegar with some honey and water. At first I had it warm like a tea and they kinda were so-so about drinking it, but they did better when I added cold water. I think tomorrow I’m going to try a recipe someone shared on FB called “Good Girl Moonshine” don’t ask me why it’s called that. It’s basically ACV and water with some ground ginger and sweetener. They use the powdered stuff that I’m not going near, but I’m sure honey will work just as well. Anyway, my friend said her kids were “guzzling” it so I’m hoping that ours will too! I want them to get the benefits of the vinegar without traumatizing them with the taste. For myself I just put a little in a glass and cut it with some OJ, plug my nose and chug! But I might taste this drink and decide if it’s okay that way and just drink it. 🙂 I’m interested to see if adding this to our daily diet makes a difference in how much illness we experience through the winter.

Claire and Gabby were learning baby’s first signs from Baby Einstein this evening while the rest of us had dinner. 🙂 They are already completely mesmerized by “shows.” Which is nice when mama needs a little distraction to get something else done. 😉 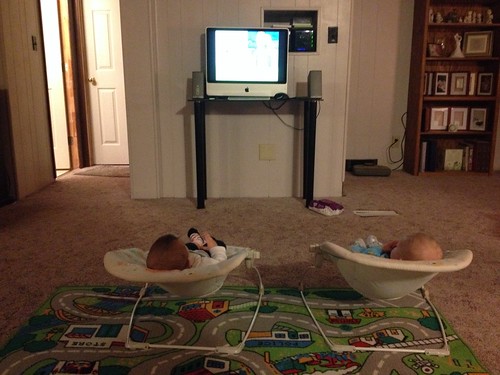 Now it is bedtime for the monkeys and I shall rejoice as a man who has run a race! Because that’s kinda how I feel today! 🙂

Oh and the roof of the LRB is partly done. My expectations of having it “in working order” over the weekend was a little ambitious but well… it’s still coming along! Soon, little goaties, soon!

One reply on “What I did today and other randomness”