So the other weekend while shopping I came across whole young chicken for $.88/lb, which was by far the cheapest meat in the store. Of course that was before I read all about the salmonella chicken epidemic that the FDA seems to be ignoring. Buuuuuuuut anyway, I went ahead and snagged 2 chickens even though I’d never cooked one whole before.

Perhaps it’s a bit rediculous that I haven’t cooked a whole chicken. I’ve heard others talk about it and I know I’ve seen plenty of recipes for it, but for some reason I was reluctant to try my own hand at it. Probably because my mom scarred me for life by making me dig out the “guts” of our Thanksgiving turkey one year. 😉 Thanks, Mom! I know it was for my own good and is a valuable skill to have. I still will NEVER figure out why they butcher poultry and then put guts BACK in the carcass for we unsuspecting consumers to find. 😉 Ha!

Actually what gave me the push was the fact that I’m really leaning towards raising our own broiler chickens next summer and filling our freezer with them by Fall! I figured I’d better start learning what to do with whole chickens before I have them stacked and corded in our freezer. 🙂 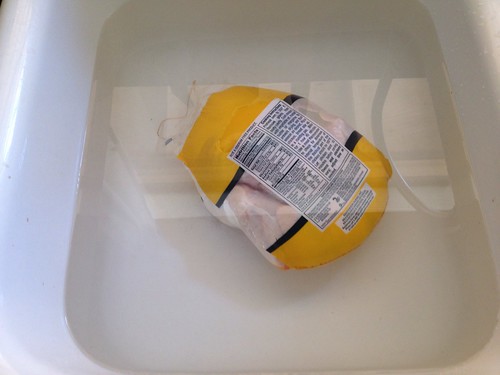 There were directions on the back for roasting it, but I wanted to cook it in the crockpot. Once the weather cools down most of my cooking is done in the crockpot with an occasional stove top or oven meal thrown in!

I found a Recipe for “The Best Whole Chicken in a Crockpot” that has a combination of spices that looked appealing to me. Besides, who can resist a title like that? 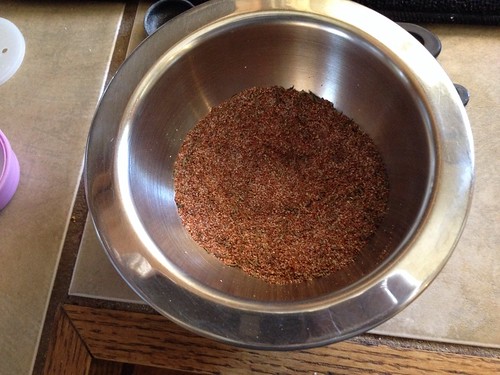 I chopped an onion, put it on the bottom of the crocpot added some carrots on top because I like em’ and some roughly chopped celery, leaves included, just for flavor! I’m planning to make stock with the bones once we’ve enjoyed our dinner! 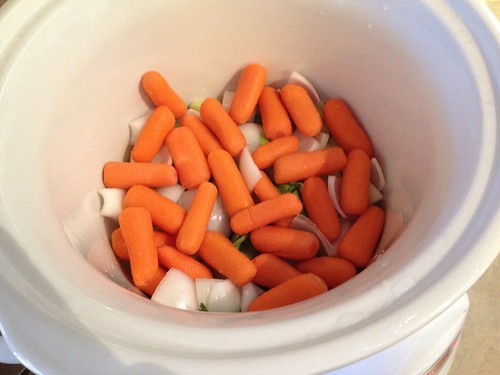 I took out the giblets, which by the way I still find revolting, and saved them and the other celery parts to add later for stock. 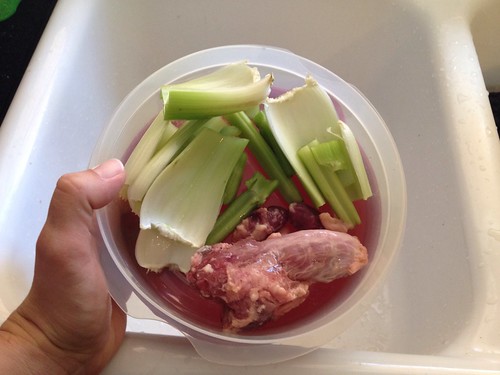 Then I rubbed the spices all over the naked chicken, while wearing disposable gloves. 😉 You can call me a wimp if you like, but I have texture issues with raw meat. Especially chicken, turkey, pork and beef. 😀 Then plopped it into the crockpot on top of the lovely bed of veg. Yes, my crockpot is missing it’s lid handle. But it still works fine, and I can’t justify getting a new one just for the handle. I can get the lid off fine with a hot-pad. Plus this beauty has been with us since we were married and is still going strong! 🙂 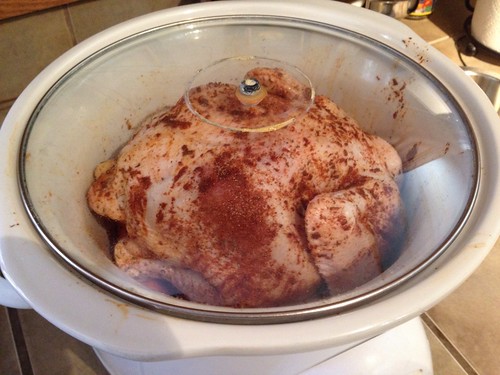 The chicken was very good!!! It was falling off the bones, which is just how I like it! The flavor was nice too! After dinner I once again put on some gloves, took all the good meat off the bones, added the giblets and veggies back to the pot, added water nearly to the top of the pot and let it cook on low all night. In the morning I strained all that stuff out and fed it to the chickens…. let that sink in a little bit. 😉 And I was left with almost a gallon of chicken stock! Woo-hoo!! I had no idea it could be that easy! 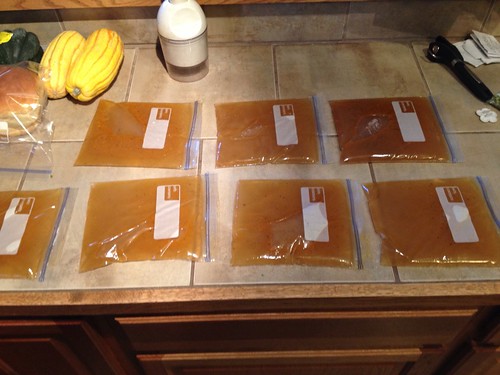 I divided it into 2 cup portions in quart sized bags, squished out as much air as possible and layered them on a sheet pan to freeze flat. 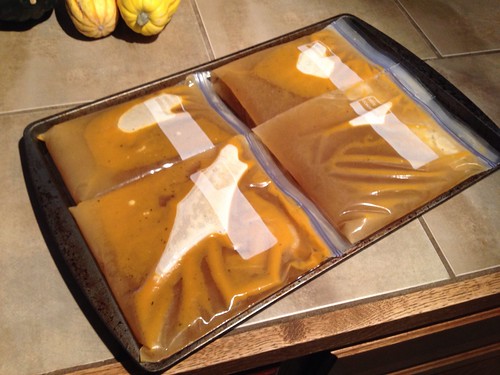 Now I can stack them like file folders in the freezer and they don’t take up as much space!! 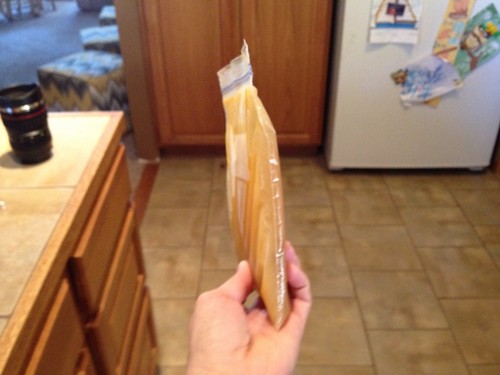 I used some that very next night when I made tortilla soup! No more bouillon for me!! 😉

And that, my friends, is how to cook a whole chicken… and write an insanely long blog post about it. 😉