Homemade Deodorant has been on my list of things to make for a LOOOOOOONG time! It may have actually been one of my first beauty products to pin as a matter of fact. However, we had a Costco sized supply of deodorant to go through first, and then there were twins, and chickens, and, and, and… there’s always something. FINALLY last week I realized I was at a crisis point where I needed to either buy more deodorant, OR make some. When Stu told me that he was also almost out, I made up my mind to invest in the rest of the “stuff” I needed to make deodorant happen rather than invest in more stuff with bad stuff in it. 😉

The biggest issue with store-deo is that it also contains chemicals in it that act as an antiperspirant but are clinically bad news. Like aluminum. Plus the truth is that your body is SUPPOSED to perspire and when you attempt to stop natural functions, it can cause problems. You have a buncha lymph nodes in your armpit area, and those are part of what works to keep the ickys out of your body. Let em do it! 🙂

Now, since today was my very first attempt at natural deodorant, I can only tell you what I’ve read from others. That there is a “adjusting” period where yes, you sweat more, and then it balances out and you don’t end up sweating as much. Lets hope that is the case. I’m kinda glad it worked out that I can make this switch in the colder months so that I’m not overly sweaty to begin with. My hope for this deodorant is that it does exactly that, deodorizes. If you have to be sweaty at least you shouldn’t stink, right? 😉 Ha! We’ll see.

I actually blended a couple of recipes that I’d found online. Most homemade stuff uses Coconut Oil and while I love CO and all of it’s various uses, I didn’t want to use it in a deodorant because as an oil, it will eventually cause staining on clothes. Also I wanted to find one that was “solid” enough to use in a regular dial-up container. Some recipes are for a pudding like consistency salve that you have to slather under your arms. Uh… yuck! So anyway, I used bentonite clay, bees wax, coco and shea butters along with arrowroot powder, baking soda, and some pro-biotics and of course essential oils for fragrance and antibacterial properties. It was NOT pretty by any means! Look at it! 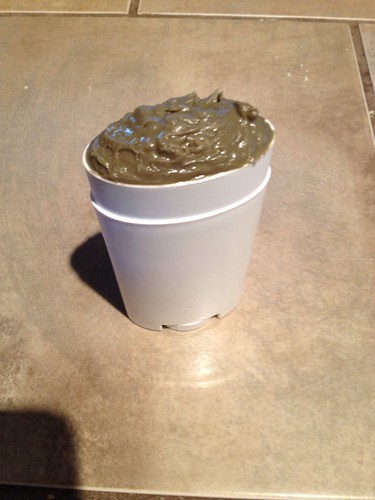 Eww! Not that it matters what it looks like. It’s not going to be a countertop display piece, but still I was kinda grossed out! Ha ha! 🙂 Just hoping that the combo works. I’ll be sure to let you know!

While I had all the ‘products’ out this morning, I went ahead and whipped up some “Man Magnet” body oil spray. Of course, the only man I’m interested in “magnetting” is Stuart, so I named it “Stu Magnet.” 😉 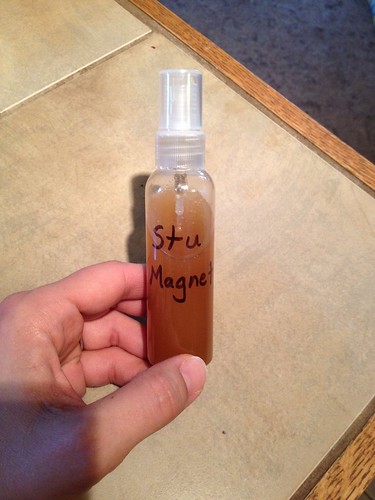 It’s sweet almond oil, vanilla and clove oil. Smells pretty good I have to say! I like it anyway. 🙂

So for one morning I think I did pretty well in the homemade department. I still need to make some deodorant for Stuart, but I’ll do that another morning. I figure he’ll want a more manly sent on his so I got some Bergamot Oil. 🙂 Mmmmmm… Rach Magnet. 😉