Today I found a friend for Polly! Another Nigerian Dwarf named Polka! How cute is that? Polly and Polka! Polka has been raised by a lady who’s been breeding goats for 42 years!! She is also vice prez of the Arizona Goat Breeders Association, so she knows her stuff! She was so sweet and helpful, and full of information! I plan to talk to her again to learn all I can about these amazing goats. The idea of helping a goat have babies (kidding. Seriously, that’s what it’s called!) is a bit on the scary side for me, so I can use all the tips and advice there is! Polka is currently pregnant and even though they were not able to see the babies on the ultrasound yet, I’m told that she usually has triplets! Wow! And the Buck she was bred with apparently has really good lines, so her kids should be excellent! I’m hoping she has a least one doeling so I can keep her! 🙂 Polka is also still “in milk” and will be able to produce for awhile yet before she needs to dry up before kidding. I’m so excited about this! We are going to meet this gal and our other gal Polly, who will hopefully be pregnant at that time, at the state fair where Polka is showing. What fun! I’m hoping to take the lads with us when we go so that they can have a “fair” experience and get to know a bit about goats too!

I know that this is going to be a steep learning curve, but I figured that we just needed to stop talking about it and just do it when the opportunity for these really good goats came up! It’s going to be a challenge, but we’re going to make it a family endeavor and get the kids involved from the get go! I know the ladies that I’m buying these goats from have a wealth of knowledge and information and will be able to help us out and get us the resources we need for networking with other goat people. It’s going to be fun even if it is a challenge! My goal, in my mind for now anyway, is to have 4 does eventually. Then I can breed 2 in the Spring and 2 in the Fall and have good milk coming in all year! Plus with 2 there will be plenty for our family and cheese making, and maybe even some to share. 🙂 I’m anxious to taste their milk as I’ve been told several times, and read in multiple places that Nigerian Dwarf milk is the absolute best tasting goat milk out there. Can’t wait!

Now back to reality. I found 7 eggs today! 🙂 And the girls used both sides of the new nesting box I built them! They were all trying to use one little corner in the coop before, but I think this will work out better for them. They won’t have to squack at each other. “Hurry up! I need to use the nest NOW!!!” Ha ha! Yesterday when I went down to let them out of their coop one of the gals practically chased me out because she had some business to attend to! I scarcely had time to fluff up the straw on the nest for her! Silly chicken!

Here’s a couple of them helping themselves to the dog’s water dish. I have to hide the dog food during the day when the girls are out because they simply LOVE the stuff! I don’t want to be buying dog food for 2 dogs AND 12 chickens! So now I have the boys feed the dogs first thing in the morning before I let the chickens out and then I feed them again at sundown when the gals go to sleep. 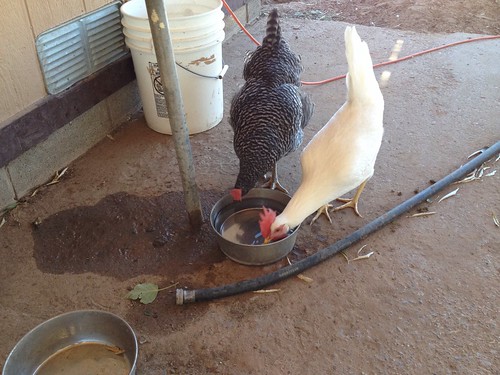 This here is Henny Penny the first layer. She had a run in with Lucky this week. Sadly that pup is going to get some “tough love” lessons as soon as I can get a battery for the shock collar. I know some people take issues with the collar, and one family member, who will remain unnamed actually took it and hid it from us once when we were using it to teach Cisco not to chase the calves. Tsk tsk! But I can’t let this puppy get away with thinking that it’s okay to chase the chickens. I think that right now he is only playing. But dogs can easily “play” a chicken to death. So hopefully we’ll be able to work with him some this weekend. He’s a smart dog, and is already doing really well at stopping at the gate to the chicken run, since I’ve been teaching him not to come in. I know he’ll get it! And the sooner he does the better all around! 🙂 Anyway, HP is fine and dandy and she doesn’t even try to avoid the dog, so apparently it wasn’t too traumatic. 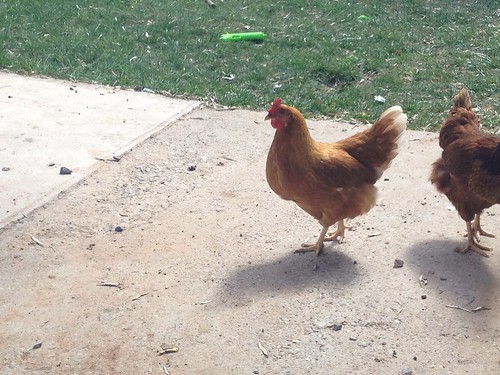 I usually check the coop for eggs around lunch time when the kids are occupied. Then I have to show them all the eggs and tell them how many I found that day! So far my biggest haul has been 7! And that has happened several times. 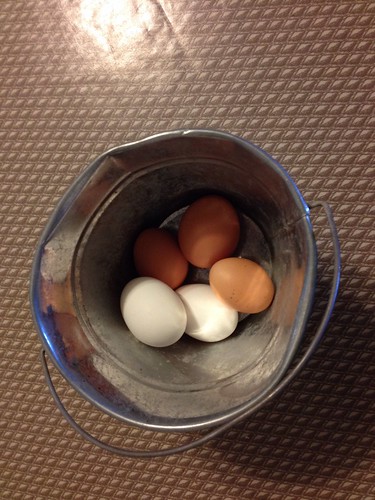 I know 2 of the leghorns are laying. At least one of the RIR is, cause she’s the one who chased me out of the coop! Two of the golden girls, and at least one Barred Rock. Not sure about the others. The last Leghorn has been a late bloomer. I’ve been concerned about her a bit recently because her comb and wattle just were not developing like the others. The last day or so though I’ve noticed that the color on them is deepening and the comb seems to be growing more. Here she is striking a pose! You can compare her comb to the one in the first picture drinking out of the dog dish. 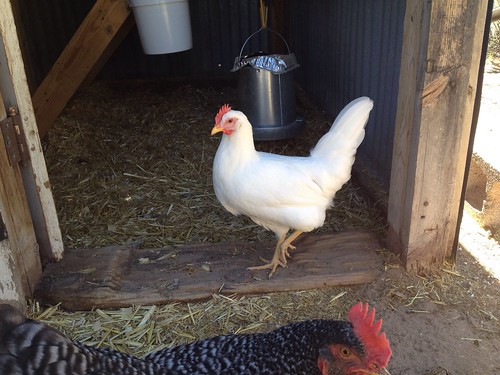 I got a new waterer for the coop. You can kinda see it in the above photo. It’s a 2 gallon bucket with little “nipples” in the bottom that the hens peck and water comes out. I was concerned that they weren’t “getting it” because I hadn’t seen any actually successfully use it for a couple days. I kept a different waterer in the pen too so they wouldn’t go thirsty, but they do revolting stuff to things that are IN the coop, so I wanted something I didn’t have to clean out every day. Today when I was down there, I saw several of the chickens pecking at the nipples on the bucket so that made me feel better! If a few of them get it, the rest will shortly follow suit.

This one is Plucky Lucky! I named her that after our dog Cisco nearly “done her in.” The other week. To be fair, he has completely steered clear of the chickens since, so he seems to have learned his lesson well. Now for that puppy… 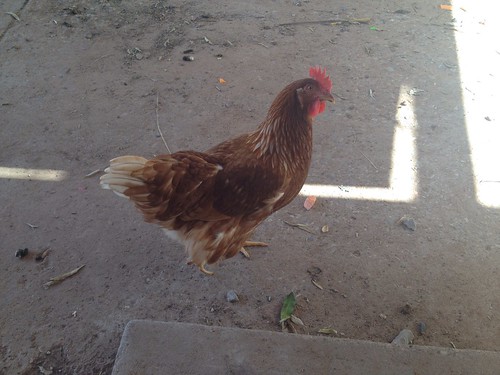 And my favorite Golden girl who still doesn’t have a name. Any suggestions? 🙂 Those three are the only ones I can tell apart except for the underdeveloped Leghorn, but once she catches up it’ll be impossible. 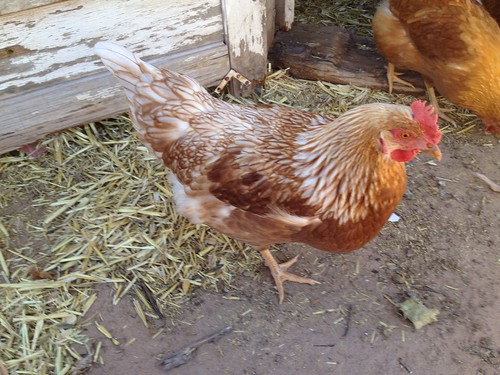 And some of the bounty! 🙂 We’ve been eating eggs like crazy and I have 2 dozen in my fridge right now! What fun! Lovin’ this!! 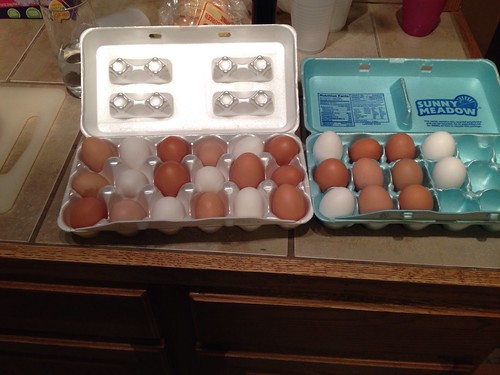 3 replies on “The two P’s and some chicken stuff”