… the chicken or the egg?

Well, I can now unequivocally say that it was the chicken that came first. 😉 Not that I really was on the fence about this or anything. Ha ha! 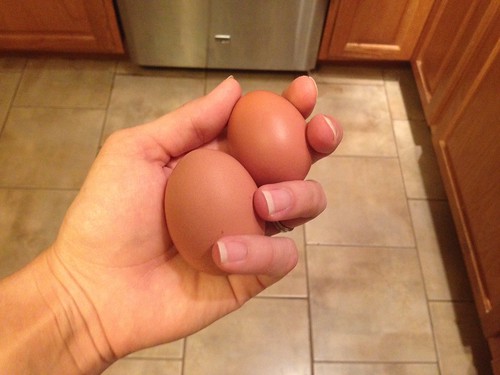 The other evening I went out to “put the chickens away” which means to close the coop door. They’re so good about all going in at bedtime and peacefully sitting on their perches. Why can’t kids be that good about going to bed? Huh? Ha ha! Anyway I went down a little earlier than usual. Most days it’s around 8pm or later when I lock them up and its duskish enough that I take a flashlight so I can see to count them. Well, they were all in the coop on this earlier occasion, and Ella came with me to put them away. As I glanced around the coop I spied a little “dip” in the chips in a corner and in the “dip” were 2 smooth round BEAUTIFUL eggs!

I gasped and said, “Look, Ella! Eggs!!” We were both SO excited! I scooped up the two little treasures, thanked the gals and made a beeline for the house so I could show Stuart! Ella asked me on the way up if there were “baby ducks” in the eggs. I assured her that there were NOT ducks in the eggs. 😉 So when we showed Daddy she said, “There’s no baby ducks in the eggs, Dad!” Good that we got that cleared up!

Initially I though there were 2 layers because one of the eggs was quite a bit larger than the other as you can see in the photo. But the larger egg turned out to have double yolks so I think that’s why it was bigger. I’ve only found one of the gals, whom I’ve named “Henny Penny” since she’s the first one to lay, hanging around the coop at various times in the morning alone. Then when I go back, there I find another treasure! 🙂 She’s laid 2 more since I found the original 2 so I’m pretty impressed with her already. It’s one of the “Golden Girls” who is laying. I know others are getting close though. Some combs and wattles are pretty sizable!

Anyway, we ate the eggs and I have to say that there is no satisfaction like eating an egg that you’ve worked for for months by bringing up chicks! Plus it’s amazing the difference in them vs. the store bought versions. The yolks are a rich orange color instead of pale yellow, and the taste is even different too! I mean, they still taste eggy, but there’s a definite difference. I’ll have to give you more info on that as I eat more of them. Right now I’ve only had one!

See the difference in color in the eggs? The salad on the Left has a store egg, the one on the Right one of “our” eggs! 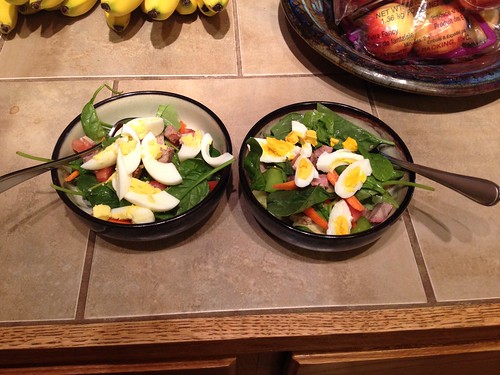 Anyway, I’m looking forward to harvesting many more eggs in the upcoming weeks! Hopefully we’ll have good enough weather for the gals to free range during the winter too and continue laying. I want to share some of these treasures with my parents and in-laws since they helped keep our flock alive while we were in limbo with the twins. 🙂