Well I started the twinkie girls out on the Baby Whisperer’s EASY routine full blast on Sunday. I just have to say that EASY isn’t easy!! At least not starting out. I happen to have experience with it from before so I know that it WILL be easy down the road when the girls are on their routine and everyone is getting enough sleep.

This week thus far hasn’t been easy though. I faithfully kept the lasses on a 3 hour feeding schedule to make sure they are getting enough calories to see them through the night. It’s amazing how fast 3 hours flies by when you spend at least 45 min of it feeding babies, and then another 30 trying to keep them awake before they get a nap! But the bigger problem was they were not stretching out their feeds at night even with the constant vigilance that they not go longer than 3 hours in the day. There were a couple of nights where one or the other couldn’t settle and then of course as soon as they did the other would be hungry shortly after. Ugh! Then in the morning the babies would be sleepy sleepy, but the other kids were up and attem. Oh my! Made for a very tired mommy, let me tell you! Yesterday morning was probably the low point. I was zombie-mom if ever there was one. I couldn’t think straight to save my life, and still can’t recall most of the morning hours!!

Last night there was a change however! I followed our routine to a T all day long! We gave the girlies (who had the inviting aroma of aged cheese) a bath in the sink which the other kiddos though was incredibly entertaining to watch. Then Stu helped me with their “dream feed” at 10ish and I flopped into bed in hopes that I would not hear their little voices till at least 3am. When the first grunts and groans started, I glanced at the clock and it was 3:14!!! Five hours, yay!!! I fed them both and went back to bed crossing my fingers and surprisingly they stayed sacked out till just past 7am! Whew!! That kind of a night I can handle!

So I’m hoping that now that they have one success under their belts they will continue to make it a trend. I know that one night isn’t any guarantee of future nights, but it was certainly nice AND very much needed!

In case you’re wondering what EASY actually looks like, here it is. Oh, and it’s supposed to eventually be a “routine” not a schedule, but when you’re first starting babies on it you have to make sure they don’t go over 3 hours between daytime feeds or they will wake up hungry. Older babies, of course, spread that out to 4 hours.

E (Eat): Feed the lil suckers!
A (Activity): This is when they are supposed to be awake. It’s very challenging to keep both of these girlies awake for their activity time and I’ve had to resort to some drastic measures like removing clothing to make them stay awake.
S (Sleep): Nap time! The point is to put them in the bed awake so they get used to falling asleep on their own. If they’re good and worn out from the “A” then they usually can hardly wait to get into that bed!
Y (You time!): This is when you get to rest, or corral other kids, make dinner, do dishes or laundry, feed chickens… you get the idea. 😉

Then it starts all over again when they wake up, or in my case, when I wake them up!

Some photos to hold you over, I’ve been bad about posting them!

They don’t look at each other much. I keep trying to make them, but they’re not all that interested in one another. 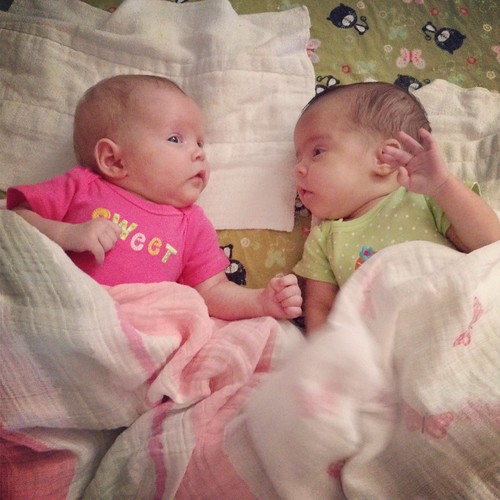 These are figurines my mom has got us. The mommy one for me when Qade was born, the Willow Tree Daddy for Stu because I took a pic of him holding Qade right after he was born and it looked just like this, and then the little Willow Tree twins. 🙂 SO cute! Thanks Mom! 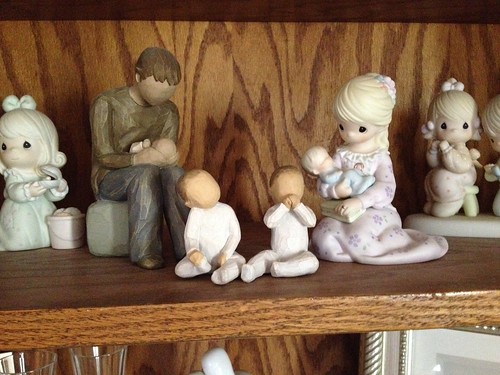 Had some “girl time” with the twins and Ella after her nap the other day! We are now the house majority, bwaaaa ha ha! 😉 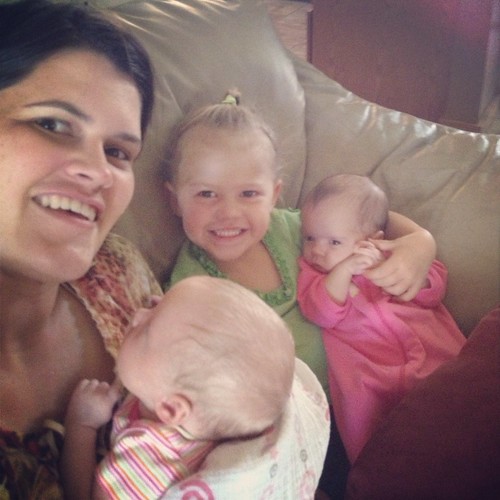 Everyone gets a kick out of tummy time! 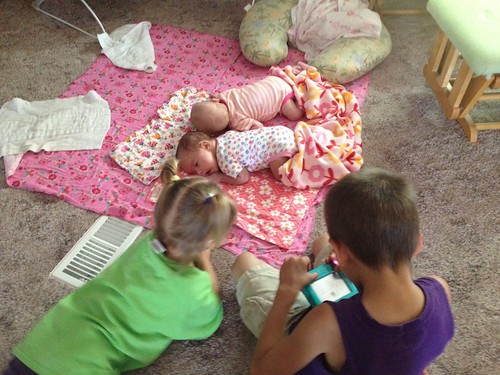 They WILL stay awake during the day!! 😉 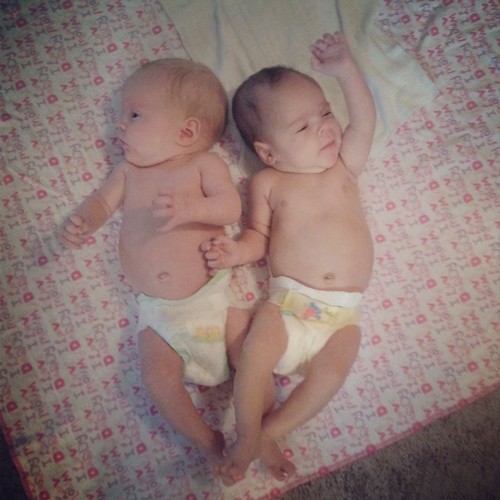 And this is what they look like at nap time. Twins are so cute! 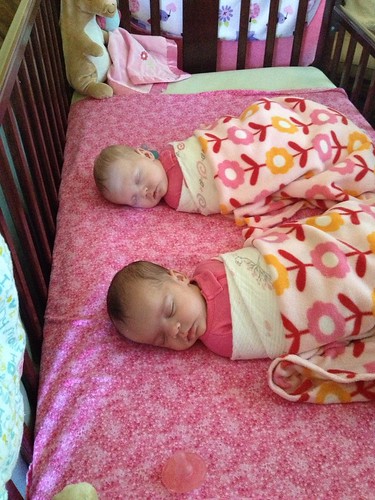