I wasn’t able to get much sleep because inevitably every time I rolled onto my side, one of the girls would come off the monitor. At 2-somethingish AM one of the doctors came in and told me that the decels were concerning with the babies and that they thought it best to go ahead and start the induction rather than have to monitor them so closely for the next couple days. I was about ready to say, just chop them out if you have to so I can get these wretched monitors OFF and sleep!! 😉 I tell ya, drugs like benedryl and Nyquil and the like REALLY make me loopy! I don’t take them at all on my own. I’d rather suffer through a stuffy nose and allergies than have to have that zoned out hung over feeling. It’s bad news!

Cooler heads prevailed though, and after a brief discussion with the doc about options, she said that we could totally go forward with a regular delivery even though they babies were having decels and even though baby B was breech.

Yeah, did I tell you that? Sometime between our 1pm ultrasound that day and midnightish when I came back over to L&D that feisty baby B flipped over!! I actually was not surprised because they had been poking and prodding my belly for FOREVER!! And the gals don’t respond well to the pressure either… maybe even less well than me. 😉 So that was concerning because my doctor in Gallup was not even willing to consider a breech delivery. I can now understand why. Probably part of it is there are not enough doctors in Gallup. In UNM there was an entire TEAM dedicated to my care through L&D and a team for each of the girls once they were born as well. Amazing!

So I called my poor exhausted hubby again and told him they were starting the induction process which consisted of Pitocin, and antibiotics again because I was GBS positive. (I was with the other 3 too, no surprises there!) I told him he could still stay at my parents and sleep as it would likely be some time before anything “happened,” but he came right over. He’s such an awesome guy! Once he was there he curled up in the armchair to get a few winks and I tried to sleep as well. I actually was able to sleep for stretches in between times they’d come and make me move to find the babies again. The Pitocin drip was fairly slow and manageable at that point so no big deal.

By morning things had started to pick up. I could for sure feel the contractions though they weren’t “that” painful yet. The nurses were in and out every so often adjusting monitors and messing with IV’s. The doctor, who’s name is also Rachel, came in to check and thought that I was around 4cm. I mentioned that while I wasn’t totally sure how things would go because it was an induction, that I usually had 30-45 min after hitting 5 before it was time to catch. I don’t know if they really took me seriously. Because I wasn’t writing in pain or screaming the way the gall in the next room had been in the night. Poor thing! I asked Stu if he slept through that and he said, “No way, I just kept praying for her!” The baby cry ended it all though so that’s a happy story. 🙂 At any rate I didn’t think they were taking me completely serious when I would tell them that it happens fast for me.

The IV port I’d had in since Saturday had now “expired” so the nurse was attempting to place another. She had 2 attempts, neither of which worked, so she had to call in another nurse to attempt a new IV placement. During this time when we were playing ring around the IV’s I started to realize that we were running out of time. I knew that we needed to get to the OR to deliver because that’s standard for twins and that’s where the NICU teams would have all their stuff. I also knew that the Pitocin was about to kill me!! I hate the stuff!! The offered it to me during labor with both Myles and Ella and I was like, “NO WAY, JOSE!!” I do not want it without drugs!

So my initial plan that I’d talked to the doc about was to get an epidural catheter placed but not use the drug unless we needed to with baby B. By the time they FINALLY got the new IV line in (which they never actually used by the way) I was telling my nurse that we needed another check and that I wanted the epidural like NOW!

Finally everyone kinda kicked into action. They wheeled me to the OR which was just a couple doors down actually and got me moved to the TEEEEENY little OR bed, ugh! The anesthesiology team was there and fairly soon (though not soon enough for me at this point) they got the spinal block in place. It took a couple/few minutes to really kick in and it was awful!! I just can’t stress enough how much WORSE contractions feel on Pitocin. Bad, bad BAAAAAAD! I have to brag on everyone who was there though. There were more people in the room than I’d like, of course, but at that point who cares, right? Everyone in there was SO professional and SO kind. I knew that all 3 of us were in good hands and that peace of mind is so helpful at a point like this.

Not long at all after the spine block, like maybe 10 min, Claire Annaliese made her debut at 10:46am weighing in at 4 pounds 5 ounces and 17 inches! She squalled right away and hearing her tiny little voice made me cry! I was so happy that she was breathing and crying! I only just got a glimpse of her as they handed her over to her NICU team. 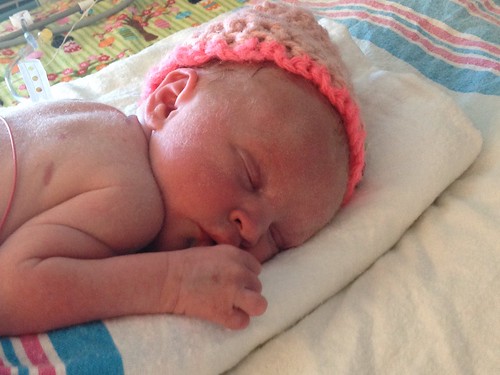 As soon as she vacated, they had an ultrasound probe on me. They had to check the position of baby B. Breech deliveries are SO different. I had it in my mind that they come out basically the same but, ya know, backwards. Ha ha ha ha!! What an education I got. 😉 They had actually told me what was going to happen, but still. The doctor was going to need to get ahold of baby’s feet and kinda help “pull” her out. The problem was one of her feet was way up smushed by her face! Doc was able to find the one foot fairly quickly, but it took quite a bit of manipulation to get ahold of that second little leg. The ultrasound tech was keeping the doctor posted of where exactly to go to find the foot, and eventually she was able to snag it. There’s no way on this earth I could have gone through that without the spinal. Praise God that we have drugs to help us out in situations like this. At one point I looked at Stu and said, “I feel like a cow!” and he laughed out loud. I’m not sure if anyone else heard. 😉

Once Doctor Rachel had the feet then it was my turn to do the work. Pushing a breech baby out is a LOT harder!! I had no idea! I was numb of course, but I still had to push and keep almost constant pressure on for her to move on down.

Finally at 11:02am 16 minutes after her sis Gabrielle Anne was ushered rather unceremoniously into this world! She was 4 pounds 10 ounces and 19 inches! She did not cry however. Breech babies often have excess fluid on their lungs and need a little extra help. She was whisked right off, but not before I got a good look at her head full of BLACK hair! Gabby had some difficulty right off and they had to help her a little bit more. Stuart went with her into the NICU and talked about how amazing her team did with her. She was intubated, and given some surfactant (the stuff that the steroid shots help their lungs produce) it was only a brief intubation however, because once they got her back to the actual nursery all they had on her was the C-Pap machine. 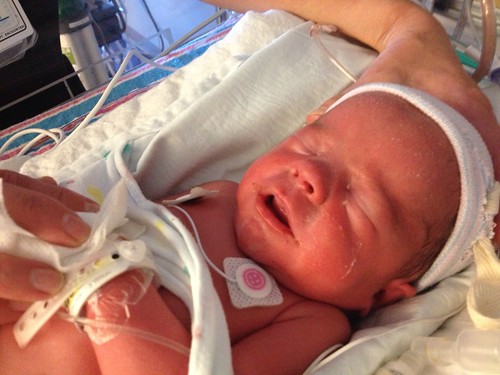 They finished up with me pretty quickly and took me back to my L&D room to recover from the spinal block. I didn’t have one with Myles and Ella so it was kind of a wonky feeling for sure. The nurse decided to get me up fairly quickly and it took help from her and Stuart for me to walk 8 feet to the bathroom, Ha! She kept telling me to just lock my knees and walk like a penguin, all I could think was, “Knees? What are those again?” Ha ha! My legs felt like fake rubber legs! I now have a new appreciation for what people in physical therapy go through to learn to walk!

On the wheelchair ride over to my room 13 in the other wing we stopped by the NICU so I could see my girls! They are precious! I was so surprised to see that Clair had blondy blonde hair!! She was breathing room air and doing fantastic! Gabby had the C-Pap in her nose, a tube to vent her tummy and over all looked much “worse” than Clair, but was actually doing quite well too. She just needed a little more help. She is feisty and strong though and at one point pulled out one of her tubes. She prefers not to be messed with. 😉 I thought it was quite humorous that our twins were blonde and black headed! At least we will be able to tell them apart!

And that is how you pick some sweet one-of-a-kind peaches! 😉 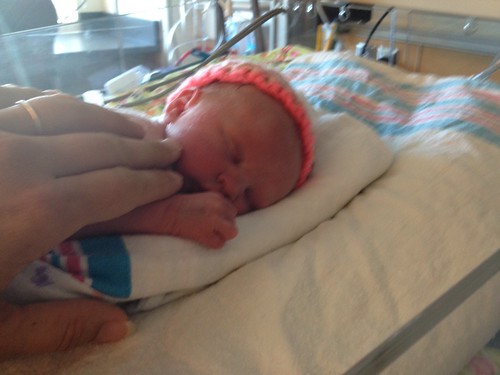 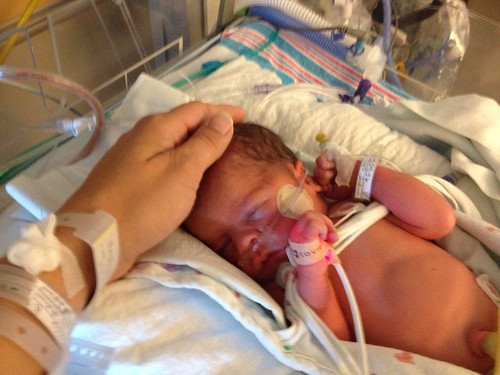