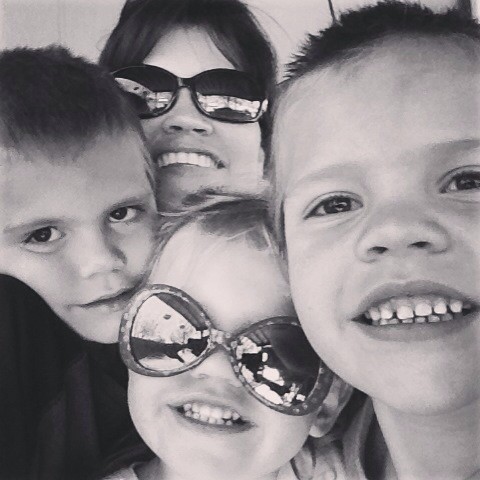 So I had a little mini-vacation this week. The kids got to stay with my parents and have their own little vacation as well. It was really nice for them since they don’t get to see “Punkin'” and Grandpa as much. Especially recently since most of my trips to town have been quick business related stuff and sometimes I don’t even take the kids. Anyway, they stayed there for 5ish days and got to do all kinds of fun stuff like Red Light/Green Light activity center, the Zoo, which is always a huge hit with the boys. I think this might have been Ella’s first Zoo experience too!! They had lots of fun play time with cousins Helen and Than too! Royally spoiled is a phrase that’ll probably work. 😉

Meanwhile I was at home getting some R&R, and it was really really good!! I got to sleep in (what’s that like again?) I got to plant my flowers (or most of them, I still have a few that are waiting for me to capture a little extra energy) and I got to drink coffee outside on the porch with no one pestering me for something. Something that I thought was interesting is that we as moms of littles sometimes forget what it’s actually like to get through a task (dishwashing, laundry, getting dressed) without multiple interruptions. It occurred to me while loading the dishwasher one evening that I don’t remember the last time I got it all done in one fell swoop! 😉

But I missed my munchkins just the same. The first couple of nights I nearly turned on the monitors in my room while I was getting ready for bed on auto pilot. Ha! The quite was nice for a change, but I found myself looking for the kids from time to time. Stu really missed them too, but as he is so incredibly busy with end-of-year school stuff, the break came at a good time.

Every mommy will tell you that being a mom is the bestest thing in the world. But every mommy really does need a break from time to time in order to be at her best the rest of the time. So thanks Mom and Dad for the much appreciated break! The kids had a blast and I was able to really relax, which was SO nice with the upcoming debut of the peaches!!

So it’s nice to get everyone back under one roof! Qade came home and one of the first things he did was feed the dog a heaping helping of kibble because, “He hasn’t been fed for five days!” Never mind that mom had been at home the whole time and DID feed the dog as evidenced by the fact that there was still 1/2 bowl of food sitting there already. Ha ha ha!! Oh well, at least he takes his responsibility of feeding him seriously. 😉

Myles was able to inspect the work that Daddy had done on the new shed. Every time we spoke to him on the phone while he was with the grandparents, he would ask if the shed was done. 🙂 It was obviously heavy on his mind because he made a bee line for it as soon as we got home just to check it out. 😉 He has had a good time helping Dad and Popeye while they work on the shed. He’s a good little helper for sure!

Ella was pretty wiped out when we got home since she missed her nap on that day, but she has slept in for the last couple mornings to make up for it, and I think she’s all good now. She’s certainly acting “normal” as far as being miss boss. 🙂 I keep telling her that she is not the boss, but she likes to reply, “Mommy boss. Daddy boss. Ella boss!” Hmmmm….. The lads aren’t too thrilled with that idea at all. Ha ha!

The peaches are doing good. Squirmy little lasses!! I would have thought by now they’d be about out of room for too much serious squirming, but they somehow manage! I feel them get hiccups frequently now, and it cracks me up! I have a happy announcement though, we have finally settled on the girls names! 🙂 Well, we’ve had first names for awhile now and one gal has had a middle name for awhile, but we could NOT come to a solid decision on the second middle name. It was driving me crazy… really! Stu finally hit upon the “right” name last night and now it’s all settled. Except I’m still not sure HOW we name them. Do we wait till they’re here and then decide who gets which name? Do we just decide which name goes first and the first one out gets it? Not so sure about that. ha ha!!

So there’s a bit of an update on we’uns. Stu is at Graduation this evening and will be stealing the show for sure. He’s the speaker and the entertainment apparently. He’s been working hard on it all, and I’m proud of him. Hope the evening goes well!! The kiddos are watching “The Emperor’s New Groove” still one of my all time favorite movies. I laughed fit to kill over this one on more than one occasion. 😉 Dinner tonight will be eggs and smokies and toast with Nutella. Sounds good to me!