“Though she be but little, she is fierce!”
~Shakespeare 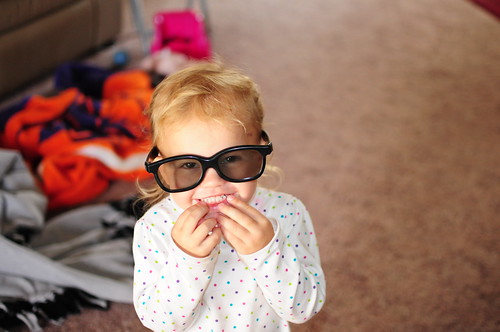 Just ask her brothers, they can attest to the truth of that quote. 😉  I’ve been meaning to do a post on our De Bella for awhile now, but as you may have noticed, I haven’t been in the bloggin’ groove.  Oh well now’s as good a time as any.

Ella is SO fun these days!  Yes, she is 2, but hardly terrible. 🙂  Her vocabulary is growing by leaps and bounds, and they ways that she chooses to use it are hysterical.  For example:  For some time now Qade’s most often used phrase toward his sister is, “You’re not my parent, Ella!”  This started even BEFORE the child was talking much.  One day I informed Qade that despite his tantrum he would be cleaning up his toys.  A few moments later I hear his compaint, “Ella is looking at me like a parent!”  I couldn’t help laughing and asked him what he was talking about.  He told me, ‘Her eyes look like a parent.”  And I have to confess that Ella does seem to believe that it is one of her inalienable rights to “boss” her brothers and make sure that they are towing the line. 😉  Recently, she has started to call Qade, “son.”  Well, you can imagine how well that goes over with the first born. 😉  “I’m not your son, Ella, and you’re not my mommy!”  We’ve been working with Qade to help him understand that she doesn’t know what “son” means but is just repeating what she hears from Mommy and Daddy, but we’re also working with Ella to make sure she knows it’s not her place to boss her brothers. 😉

A lot of Ella’s words are still not very clear, but she is adding much to her vocabulary.  Considering the fact that in the summer she was still just humming to communicate, I’m pretty happy with her progress!  At night when I’m rocking her before bed she will often request “do-do” for a song.  She’s referring to “A Bushel and a Peck” which has a “doodle-oo-do” part in it.  I’ve sung her that just about every night of her life, so it’s no wonder it’s a favorite song.

She LOVES her baby-doll.  The other day she had taken it to the white house (the guest house) to visit her grandparents, and forgot it there when she came back up for bed.  Daddy was convinced that if he made a big enough deal about her getting to sleep with one of her other dolls, she would be fine.  After a couple of minutes of hysterical screaming and saying “NO!” to every offered replacement, Daddy drove down to the white house to retrieve her baby. 😉  It’s really cute actually.  I wasn’t much of a dolly gal preferring stuffed animals or mud when it came down to it.  So I think it’s really sweet to see her so protective of her little baby.

She still says “Foffee” for coffee “Munch” for lunch and she thinks that she is invincible and can climb anything she can get her hands on.  She will tell me “yike” with a shake of her head if I’m trying to get her eat something she thinks she doesn’t like.  She shows the perfectionist tendencies of her brother (Q) and father before her, but they seem slightly less acute, which is good!  She is pretty good about little tasks like cleaning up her toys and such, though recently she has started to tell me “Myles do it” when I ask her to do something.  I reply that no, Ella is going to do it, and usually she complies before it gets to the point of time out. 😉  She will also cut corners from time to time, by simply taking whatever it is to it’s appropriate room and just chucking it in the door instead of actually putting it away.  We’re working on that one.

Ella likes to be helpful, and thinks that she should especially get to aid Mommy with the dishwasher loading and unloading.  While it’s a chore I wouldn’t mind passing on to someone else, I’m not ready to let her handle sharp knives.  But I do let her put away the plastics and the kid spoons and forks.  She LOVES to help!  In fact if she spots me wiping the tables or the counters she will run up and yell “Keen!” and I often give her a wipe to use to “keen” whatever she comes across.  Our windows have been ‘keened’ a lot by her and Myles who seem to find it a great game to play while Qade is busy with school.

She’s a bundle of fun for sure! She has a captivating little grin that gets her out of more scrapes than it should as Stu and I just laugh at her to each other. She is anxious to please however and most of the time is quick to obey. The biggest thing we are working on with her is her tendency to scream whenever something is “bugging” her. If she’s frustrated with a toy or with he brothers, her default right now is ear piercing screams. Which isn’t an acceptable reaction for sure. 😉

Ella is as fierce as she is little though, and will wrestle with Daddy and the lads and be in the thick of it all! She loves the game that they play that’s kinda like hide and seek, but more like hide and scare. The kids go to the boy’s room and count while daddy hides. Then they try to find him and he leaps out of his hiding place and roars at them while they scream and try to get away before he snatches them and tickles them. Ella will request this particular game by saying, “Tount ten!” which is Ella-ese for count ten. 😉