Like I said in my synopsis post, we celebrated early. My wonderful Hurb let me sleep in, AND he fixed all of us breakfast. It was while we were waiting for breakfast that Ella took her header off of the bar chair. She was sitting their chatting to me over the counter one minute kind of rocking from side to side slightly, on her bottom even for once, when suddenly I looked up to see her disappear over the side. At first I thought she might have scampered down, but then I heard the thud. I figure she must have leaned to the side and simply missed the edge of the chair with her hand. Poor thing. 🙁

Anyway, I comforted her and rocked with her before we ate and she cheered up a bit so I we weren’t too concerned. It’s not like heads running into things is an uncommon occurrence around our house.

We all ate breakfast and then I got to open my gift. But first they serenaded me with a lovely rendition of “Happy Birthday” 🙂 Here they are singing… well, at leas Stu was singing, not so sure about the rest of the choir. 😉 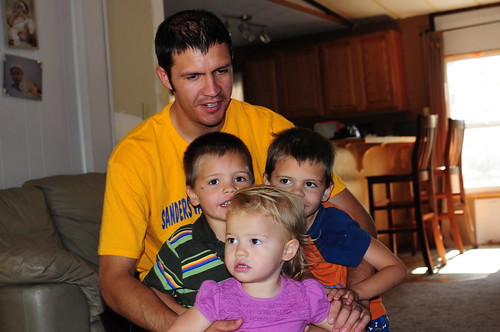 The wrapping came off of my gift fairly easily, but I had a bit of a hard time getting the box open. Still a kitchen knife and perseverance payed off. 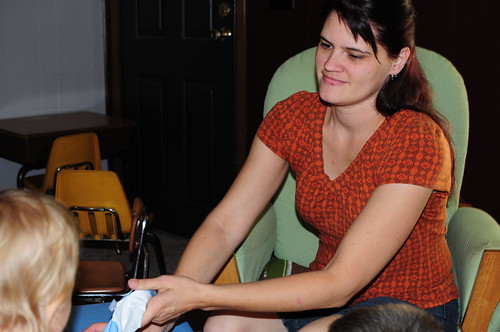 It was so heavy that at first I had the crazy thought that Start had given me tools. 😉 It is a tool, but not the masculine kind. 😉 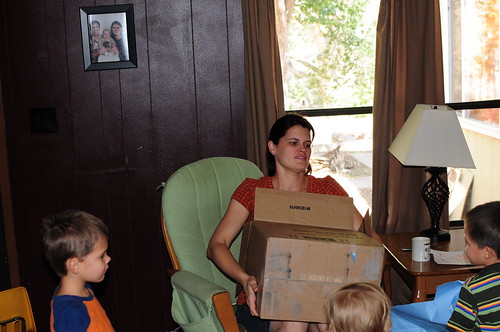 It was a Kitchenaid mixer!! Woo-Hooo!! I never really thought too much about having one of these before. I didn’t register for one for our wedding, and honestly didn’t think I’d “need” one badly enough to justify the price. But that was before I started making Pioneer Woman’s recipes. 😉 Sure you can get by with a hand mixer, but these lil beauties make everything SO much easier. 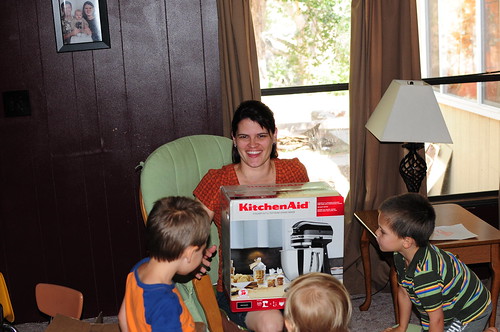 I’m so spoiled!! It was such a thoughtful gift from my Love. Thank you, Stu! You’re above and beyond the man of my dreams! I know you’ll enjoy what I concoct with the help of this appliance!

The kids were amazed by it all as well. They don’t really care what the gifts are or who’s they are, they just want to be part of the action. After it was all unwrapped and unpacked Qade pounced on the manual, which also has recipes complete with photos, and started to suggest that “We shall make THIS!” and that we should do it today too! 😉 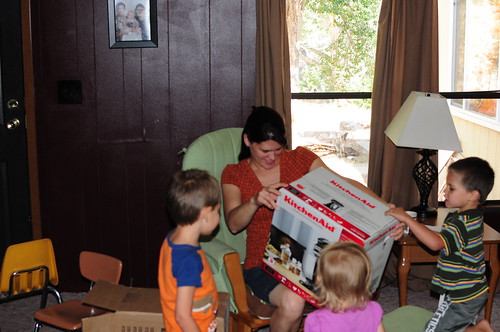 It was after all the fun that Ella started to go downhill mood-wise. She was fussy fussy. She acted like she wanted to sleep but couldn’t get/stay comfortable. I would hold her and rock her and she’d still fuss and fuss. She wasn’t very steady on her feet either and it started to concern us simply because it was very out of the norm for our lil sunshine.

So I packed her up and Stu buckled her into her seat and away we went to the ER 50 min away. Fortunately they weren’t that busy for a Saturday and we got right in. The docs there were concerned about the story and thought the best course of action would be a CT scan for peace of mind. I agreed, but at the same time knew that it meant she’d have to be sedated because she’d go bonkers otherwise. She’d already totally wigged out in triage when the nurse put the CO2 monitor on her toe. She hates those things and always has. They wanted me to leave it on since they’d just have to hook it up again later, but after her hysterics over it wouldn’t quit even when I was holding her, I just took it off. Sorry docs, sometimes Mommies know best. 😉 (Oh and by the way the toe thing was the first thing she kicked off after she “came to” when we were all done. 😉 She didn’t even mind the oxygen tube as much.)

Ella dozed off from time to time while I was holding her, but eventually she had to have the IV done and all the little gadgets hooked up. It was difficult to hold her down while they did the IV, but fortunately the nurse doing it was very good and it went smoothly. I just kept singing to Ella and telling her to look at me and rubbing her head. I have to pat myself on the back for keeping it all together through the whole thing. Ella was screaming through much of it, any time a doctor or nurse came near her actually, and of course she couldn’t understand what was going on. So I knew I needed to be brave for her so she wouldn’t be even more scared, but it was a difficult thing to do.

CT scans aren’t a “big deal” but all the prep for it and the sedation and such seemed like a big deal. It gave me more of an appreciation for what I know some parents have to go through on a regular basis with their children. My heart goes out to them because as difficult as it was to hold it all together through this, I can’t imagine having to do it over and over for more serious procedures. I praise God for the health and wellness that He has given to our children, and I don’t want to take that for granted.

Ella was only lightly sedated so I stuck by her side while we went to the CT room. The tech in there asked me if I wanted to stay in the room with her and I said yes, so he gave me a big lead apron. They asked if there was a chance I could be pregnant, and I felt like replying, “Only as much as any other married woman.” but caught myself in time to just say no. Sarcasm bubbles to the surface faster when I’m feeling stressed, it’s true. Anyway, I was bound to stay in there and be radiated with my baby. It was a good thing too because she started to fuss again even through the sedation, and I was able to calm her a bit by rubbing her fingers under the lead blanket, and singing to her.

It was over quickly which I was glad for. For some reason I was thinking MRI and how it was going to take forever, but no, it’s more of an x-ray type thing. Ella was already starting to come out of it a bit when we got back to her room in the ER. Eventually they took all the plugs off, after she had already kicked the toe thing away, and as soon as she was unplugged she fell asleep in my arms. I enjoyed holding her. Usually she’s a quick cuddle and off like a shot kinda gal, so holding her was nice even though I didn’t like to see her feeling badly.

Well, eventually the results were back and they said she was okay in her head. 🙂 Likely it was just a mild concussion and she’d be good to go in no time. They wanted her to eat and drink something and keep it down before they would remove the IV. What is it with them not wanting to remove those things?? I felt like it practically took an act of congress to get mine removed after having Ella and all I wanted to do was take a stinkin’ shower! (vent over) So I woke up the poor sleepy girl and gave her half a cup of apple juice and some goldfish. I wanted OUT! 😉 She kept those down but was pretty lethargic. I was pretty impatient. So I opened the door to the room hoping to get someone’s attention. Eventually the doc came and said they’d give her another 15 min and if it all stayed down we could go. Sometime between when she said that and when she came back Ella woke up for real. She started talking to me, eating more goldfish, sitting up in the chair, lying on the bed and laughing. Soon people started coming in and talking to her and she’d smile at them and was lil miss outgoing. So after waiting for some more time the nurse finally came in and took out her IV and we were free to go, yay!!!

It had seemed like a long long time, but when I looked at the clock I realized that we’d been in and through the ER in 4 hours. Surely that’s some kind of record, right? 😉 Stu and I were just so thankful that there was nothing seriously wrong with our bugga.

Stu has cleaned the house and the kitchen for me while I was gone as another b-day surprise. We got home, and Ella got to see her Auntie Tiff which she was thrilled about, and she slept like a log that night. I was glad that she was well and I could still take her to spend some time with my parents as the rest of us went to Disney. And lest you think it was mean not to take her, she had a BLAST with her grandparents and cousins whereas she wouldn’t have been nearly so happy to be strapped in a stroller during the 108* days we spent at Mickey’s house. 😉

But more on that to come later.