I’ve told you all about the hummer wars that go on daily around my feeders, but I thought I’d go ahead and post some photos to prove it too you. 😉 I had a post about Ella’s crazy hair scheduled, but somehow it got lost in the domain change that we recently went through (didn’t know it happened did ya?) or else I just dreamed that I wrote the post. That could happen. 😉 Either way, I can’t find it so imaginary or not it’s not here. BUT I will rewrite it because those photos are TOO hysterical not to share. 😉

Till then, you get hummers. Ha ha!

I bought a second feeder after I finally gave up on the dinky $.98 one from WalMart that wouldn’t work or leaked and made me sticky. This feeder I call “the big gulp” since it holds 32oz of nectar. If I’m not mistaken, this feeder would be illegal for the New York hummers. 😉 But it keeps the ones here satisfied for a slightly longer time than the other one did. 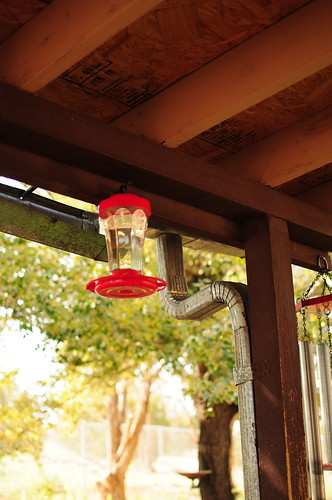 I’m still using the other one too though, so there are plenty of perching spots. Ah, I see one coming in for a fill up already! 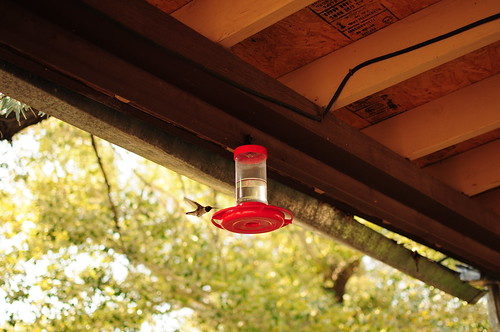 You can see how they kind of gather under a tentative truce once everyone is hungry enough from fighting. 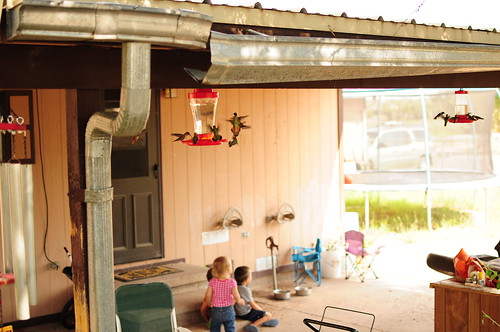 It’s rather hysterical to watch them, but it’s pretty hard to get good photos of them since they are SO fast! Did I tell you one crashed into my window the other day? By the sound of the thump I was expecting a bigger bird, but looked out to see one of these tiny things. I was afraid that it wouldn’t recover, but after a few minutes of shaking it off, he took off to the nearest tree and seemed to be doing fine in hover mode, so that’s a good sign.

Anyway, I guess if you live in the boonies you have to get your entertainment where you can. 😉 Actually though I love to watch the birds, and hummers give great performances. If you want to come see them for yourself, we’re still having daily showings. 😉 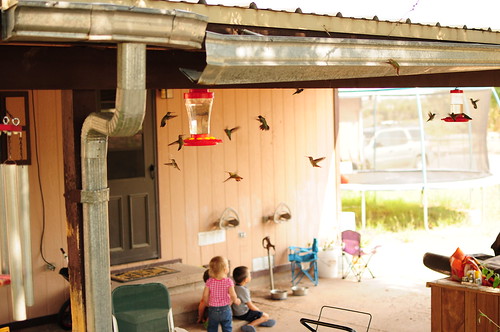