This is how I viewed the eclipse. 🙂 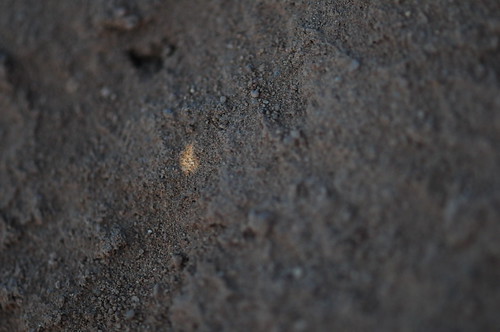 I remember watching an eclipse as a kid in Glenwood Springs and this is how we did it. Since I took one momentary glance at the sun/moon and thought my eyes might be damaged for life, I opted this method again. 😉 Just poke a little hole in an index card and watch the teeny “sun” through it. I probably would have done better to place another paper on the ground rather than just see it in the sand, but I hadn’t thought that far ahead. And since it was 7 o’clock-ish when all of this was happening, the angle was a little tricky.

Either way it was fun. The kids weren’t all that interested, but I found the darkened light to be fascinating. My shadow was really funky looking too. My brother tells me it’s because the light that hits you during an eclipse is actually from the future. 😉 Sorry, I don’t claim to know anything about the theory of relativity or whatever it is, but it was fun to watch. 😉

The eerie light made me think of some things. One, I thought about the day that Christ died and how the sun was darkened. I wondered a little bit if it wasn’t something similar to an eclipse. The sunlight was obviously still there, but it looked “dark” in a way. I wonder what people thought on that day when the sunlight darkened. I also thought of the end of the earth when again the sun will be darkened. I’m glad that I won’t be here to see that particular event! Just some thoughts brought on by the strange moon shade.

Anyway, I hope that the kids will be more interested the next time an eclipse rolls around. Maybe we can get a telescope with a sun filter on it or something. It was really tempting to look at the sun, but impossible to do so too. Ouch! 🙂