I’m glad that kids face is mostly cartilage! Myles fell right on his nose apparently while monkeying around outside. He usually has stellar balance, but this day it didn’t kick in in time. Poor dude! He’s been very brave through it all anyway. Grandma was there to comfort him when it happened, and he spent most of that evening with a tisue stuck up his nose. I held him for some time with an ice pack on his face while he attempted to watch “Lightning McQueen.” He complained more of not being able to see because of the ice pack than of his nose hurting.

The next day we already had doc apts for Qade and Ella since they’d been feverish and coughing a bunch. So we brought him along for the doctor to look at his nose even though they told us that the “couldn’t get him in” that morning. The doctor looked at him and then told Stuart to go tell them at the front to admit him because he might need an x-ray. Turns out, though, after looking at it with the scope and cleaning it a bit with saline (which I’m glad she was able to do because he’d pitch a fit when I tried to clean it a bit) she told us that it wasn’t broken and he didn’t need an x-ray! Whew!! Nice to know! 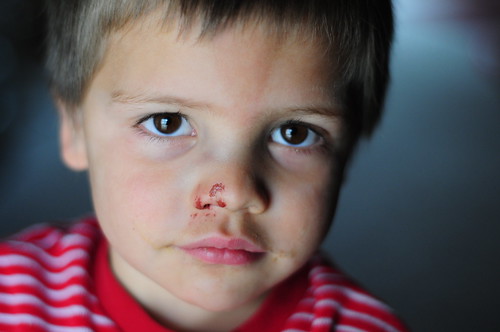 So he’s a bit bruised, and scabby looking these days, and his nose is still swollen, but not misshapen which is a relief! Because getting this lad to slow down and stop careening around at 100 miles and hour is absolutely impossible!!