Someone misinformed the arachnids in our area that our sink is a good place to hang out. 🙁 I find a spider in my sink nearly every morning, and sometimes more than once a day. I have no idea where they are coming from and how they get there, but I generally wash them down every chance I get.

The other day I was breaking up some ice and there was a big chunk I threw in the sink. When I came back a little bit later this was what I saw. 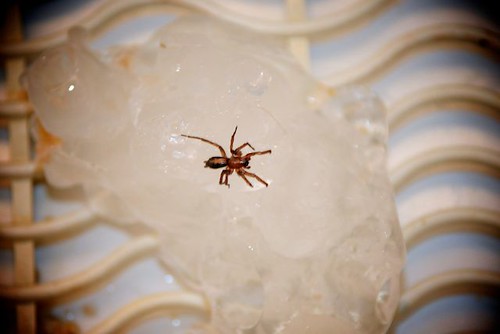 Apparently no one ever informed him that crawling across a big chunk of ice was a bad idea. I think he was kind of frozen here. I don’t know if spideys are what you’d call “cold blooded” (is that goo that makes up their guts, blood?) but I do know that they don’t move so well when it’s cold. 🙂 This dude eventually took a spin down our garbage disposal.