It’s good for me to be on the other side of the camera. For one thing it helps me relate to what my clients are going through in part. It can’t be quite the same because, as I’ve said before and probably will again, it’s different trying to direct your own kids to “pose” even in a “non posing” way that will work for portraits. Even though we had camera help from our good friend Alli, I was still the one “setting up” the session, so that proved difficult. I can understand a bit more the parent frustration when you have an idea in your mind for a beautiful family photo and your kids are running around like big-foot. Yep.

We got to the location, and it was a touch darker than I would have liked because of some heavy cloud cover. But oh well, can’t chase the clouds away. So there was an open field with beautiful sunflowers that worked swell, yay! The boys, I think, never stopped talking for one moment of this session, and believe me we hurried!

After the first few attempts at photos in which we couldn’t get the kids to look the same direction at once, of course why should I expect it? Ha! Qade promptly sliced his finger while trying to pick a flower, poor guy. Those flowers may be pretty, but they don’t like being picked! SO of course he was dramatic for awhile after. 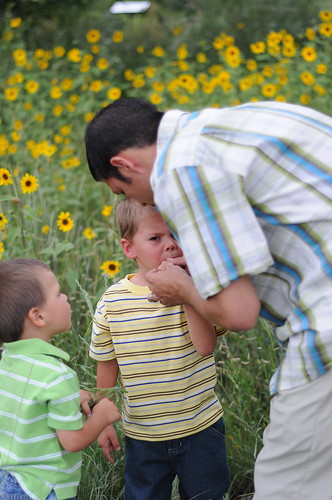 Since everyone was “done” with the sitting on the ground idea, we tried a standing up pose. But Myles refused to hold Qade’s hand until Daddy said, “Okay guys let’s pray.” Then he did, but his face looked like THIS! 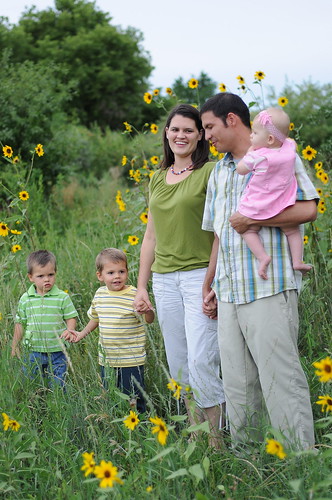 So we walked a bit farther into the field to get some of the mountain in the background. The lads decided that the grass was just way too difficult to walk through on their own. 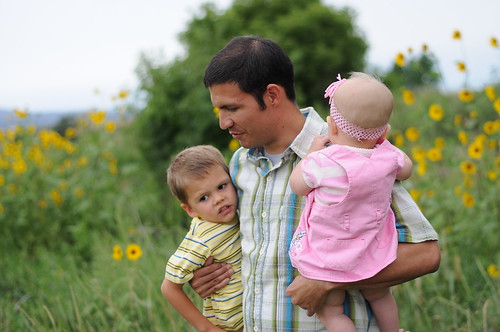 Qade amused himself while we struggled to get the others situated. 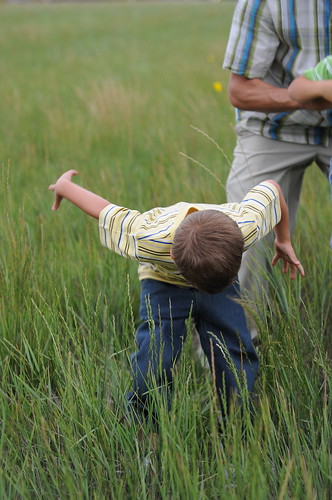 Thought we’d try a “people pile” picture, I mean, how hard can that be? But it was starting to sprinkle just slightly so we got lots of hands over eyes, and in mouth pictures from this set. 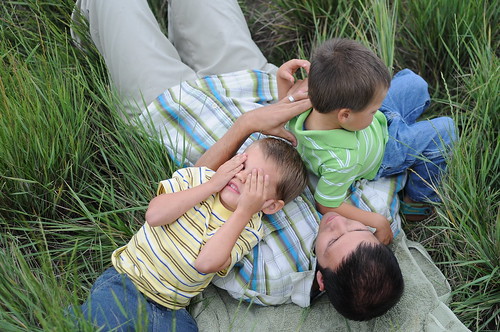 Then we decided to give the fence a try…. 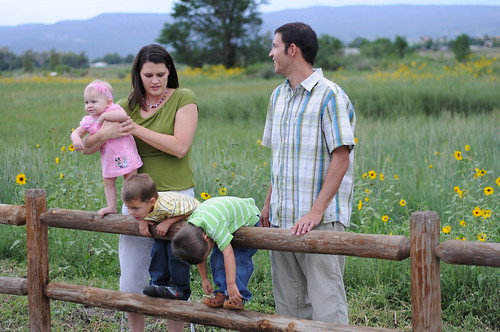 As you can see, it was an adventure. Yes, these particular shots make me feel stressed because I remember what it was like, but they make me laugh too. 🙂 And that’s part of the point. If you can have fun, and make memories, AND get great photos from a session, you have succeeded! We did have a great time. It was fun to see Allison and she did a fantastic job snapping photos of our family! I didn’t get my “dream shot” but then, I don’t know that I need to. I won’t be creating any canvas wraps with the photos we got, but I will be filling my house with prints, because they are REAL memories and something that we will smile at and chuckle over for years to come!

Someday, I know, I will get “the” shot of our little family, and I’ll be able to have that awesome gallery wrap, but perhaps it’s just as well to wait till the kids are a wee bit older and can take and follow directions a bit better. 🙂 In the mean time, I have plenty of happy memories from our little “Sun flower shoot.”

Oh, and in case you were thinking that the pics in this post are what I’ll be printing, they aren’t! 🙂 They’re only snapshots along the way. TOMORROW I’ll post the “real” photos. Stay tuned for that!

One reply on “Adventures of a Family Portrait Session”