Ack, I’m so behind!!! Everything has been crazy, and apparently I’m not good (yet) at balancing a small business AND keeping up with three small fry AND getting all the house stuff done AND keeping up with my own personal blogging and picture taking. Bah! 🙂 Oh well… one day I’ll have it down. 😉 Till then you can enjoy the 3 amigos in their 7 month glory. 😉 Can’t believe it’s flying by so fasts!!! Someone find the conductor on this crazy ride called life and make him slow down a little. Ha ha!

Qade. Man, it just hurts me to see the poor quality of these photos. This was back when I only had a cheap point&shoot camera and it was going downhill fast at this point. I’m so happy that we’ve had a nice camera for most of our kid’s baby pics. 🙂 It was only a couple months later we got my other “baby” so the pictures will get better of our adorable little Qade. This was Nov of 2007 and we were getting ready for Christmas. Did I tell you that Qade started crawling at 7 months??? That boggles my mind now! He was rarin’ to go though that’s for sure. And look at how stable he is sitting up on his own! This “squinchy” face was his standard look for these few months. He figured out that when the orange light came on the camera it meant a flash was coming so he’d squint at the camera, hilarious! 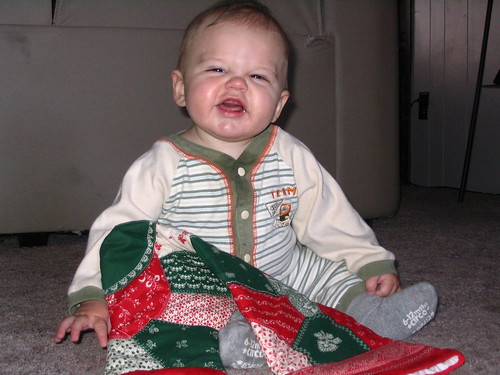 Mild Myles. 🙂 He was such a chilled baby. He didn’t even roll over till 7 months, so forget crawling! Who would have thought that once he figured out he could move on his own that he’d turn into such a monkey! Ha ha ha!! My smiley guy! Just couldn’t get enough of this guy’s smiles! Still can’t come to think of it! 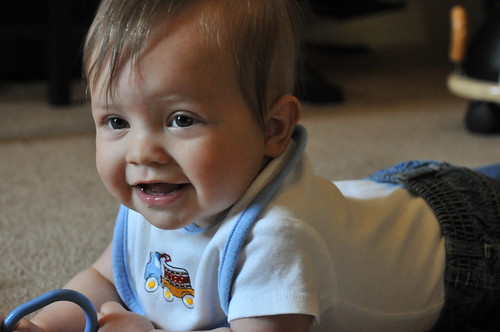 Ella Bella! Her eyes kill me! They are so expressive and inquisitive. She just takes it all in. I know she’s going to be a thinker. She’s finally in her exercauser!! I told you I’d get it cleaned eventually. She does play with the toys around it, but she doesn’t put stuff in her mouth. She is more like Qade in that manner, but moreso. 🙂 Qade wasn’t a chewer either, but he did suck his thumb, and he did like to eat. Myles put EVERYTHING in his mouth including fingers and toes, and horked down every bit of food in sight. Ella has decided she’s content to live on formula for the rest of her life. I’ve even tried bananas which, come on, every baby likes, with no success…. well, at least not beyond a couple of bites. She’s just a much more petite eater. She doesn’t even always finish her bottle and she’s still only getting 6 oz a feeding. Small appetite for a littlest girl, and I’m okay with that. She’ll eat when she’s ready, I know. 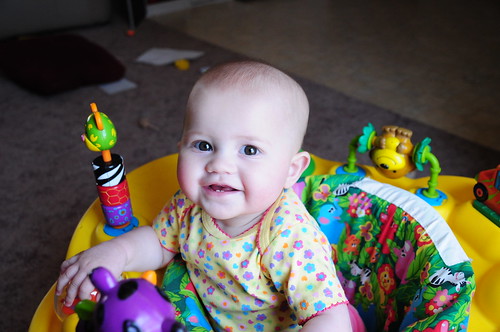 Well, I’m off to stuff my own face with a little lunch before I hunker down and get some more photo stuff done during nap-time. At least I hope it’s nap time! Yesterday I fought for 2 hours with the Myles lad to get him to nap… I’m sure today will be better!! (Knock on wood)