Here’s a non-Ella picture for you! Ha ha ha!! I know you all love seeing her sweet baby cheeks too! BUT I have to say that I think this is a way cool picture! I took this in the candle light the week before New Years when our power went out. It went out before Qade had gone to bed and he had a BLAST running around with his Daddy and his new Christmas Lightning McQueen flashlight! 😉 Ha! Anyway, we sat together near the candles and he had a snack of trail mix before I took him to bed as well. I took quiet a few pictures of him trying to get at least ONE that wasn’t blurred… low light, ya know? So he was messing with the curtain when I snagged this one, and thought it was just too awesome. Sometimes the non smile pics can be the best ya know? 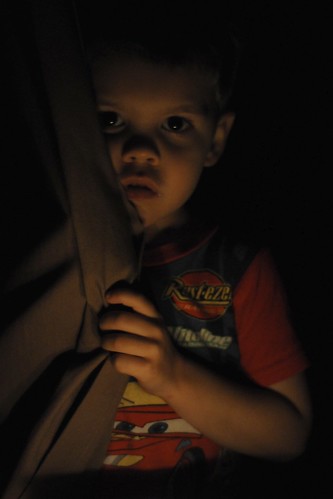 Hope you enjoyed that. The next post… which is coming up in about 10 min WILL have pics of Ella, but since it’s one that’s already been “officially” posted, I don’t think it counts.