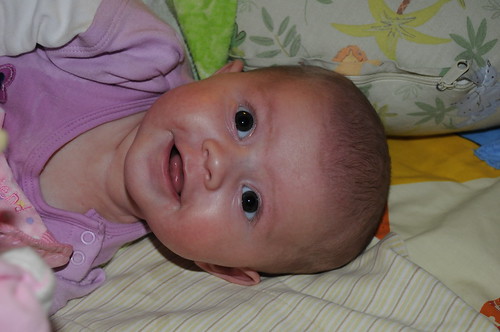 Today our little Ella is 3 months! A quarter of her first year is gone already! So hard to believe! I know she’s going to be TOO big before I know it, so I’m enjoying these little moments to the fullest! Our girl doesn’t like to be rocked to sleep and it’s seldom that she’ll even rest her head on my shoulder or chest, but when she’s sleepy she does kind of just snuggle in a little, minus the head, and I just love that feeling of her weight in my arms! She’s a precious little girl and I’m already so blessed to have her in my life!

So what’s she up to at 3 months?? Well, she “talks” a lot! Already quite the little babbler! She LOVES to gurgle and coo, and her sweet expressions while she tells me all about it just make me want to keep talking to her too. 🙂

In a pinch her own reflection will do as company! 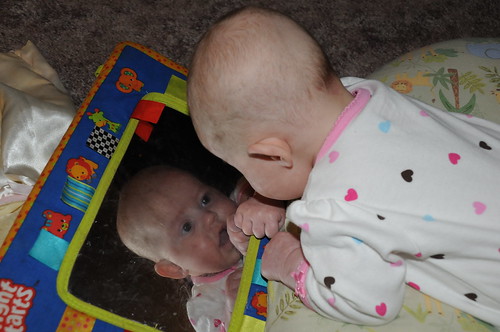 She’s using those amazing baby abs already to try and pull herself int a sitting upright position. I’ve used the Boppy a couple of times and had her actually sit up and she can do it for a little bit. She’s wobbly yet, but that’s okay… I don’t really want to rush her out of her baby-ness too soon! 🙂

She has fantastic motor control over her arms and hands and will grab the toys on her matt and swing them around. She has recently discovered that hands make amazing munchies as well, and there’ve been a couple of nights where I woke up to the sounds of smacking as she enjoys her hands after working them out of her swaddle! 🙂 She’s not yet discovered that amazing digit called the THUMB, but I have no doubt that she will follow in her brothers footsteps and be a thumb-sucker as well. She sucks on anything that she can get close to her face now as it is. Her blankets, loveys and burp rags, not to mention my shoulder or face if it comes close enough, have all been schmoozed. 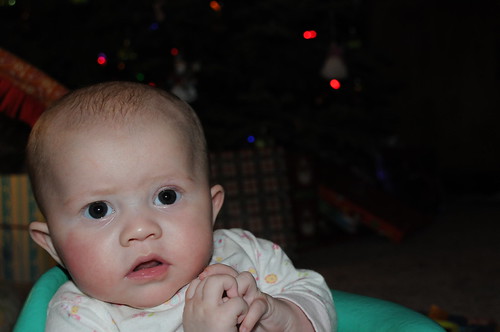 I hate to think it, but it seems that she’s already got 2 little spots on her bottom gum that seem ripe for teeth! Wow! Maybe she’ll hold out awhile yet. Her brothers both started teething around month 5, which is STILL pretty early!

Ella is a true sweetheart! She seldom fusses while at home. As soon as she sees me her face lights up in a big ‘ol grin! The other day she was crying and I had just got her out of her bed. She was trying to act like her feelings were hurt for being left on her own for SOOO long, but I was talking to her and she’d get her poochy lip going then it would change to a big smile, and back and forth. All the while she was “telling” me about it too. I was cracking up! Way too early for such hefty mood swings! 😉 But generally she is the MOST content baby ever! The times she’s the fussiest are when she’s overly tired, say her schedule is wacky, along with someone unfamiliar trying to comfort her. She usually does fine being held by others, but doesn’t tolerate it well on a lack of sleep. Those are the factors involved in the majority of her serious meltdowns… which actually have been few.

I’m so thankful to have such a happy and easy baby! Right now in our lives as we deal with different issues in our other children, it is so nice to not have that added burden of a colicy baby as well.

Ella is our little snip of sunshine, and the whole family seems brighter when she’s up and around, and ESPECIALLY when she’s bestowing smiles and laughter!

One reply on “Guess who’s 3 months”