Well, I thought I’d post my yogurt making experiences for all of you and inspire you to give it a whirl yourself! 🙂 It’s HUGELY economical if your family likes to eat yogurt, and personally I think that it tastes way better than even the good Greek yogurt I was buying at the store. Now for the price of less than 2 of those greek yogurts I can make a whole half gallon of yogurt!!!

Anyway, THIS is the site where I got the basic recipe. I tweaked it a bit in that I didn’t add the gelatin and I strained it, but I did want to make “flavored” yogurt because all of my experiences with plain have been awful. This yogurt turned out so smooth and a lot less tart, so I may try it plain next time just to see. I also watched the Good Eats, pt 1 and pt 2 on youtube. Got some great ideas that I incorporated with the recipe off of the other website.

Okay, so this is what I did. I poured 2 qts (half gallon) of milk into my crock pot. No I didn’t take pictures all along the way because I was in a hurry… sorry. Put the crock pot on low for 2.5 hours. I just set the oven timer so I wouldn’t have to think about it. When that beeped, I turned the heat off and let it sit covered for 3 hours. At that point I scooped out about a cup of the still warm milk and mixed it with my “starter” which was a cup of plain yogurt with LIVE and ACTIVE cultures in it. Whisked them together well then added them back into the milk and also whisked in 3/4 c. of honey (for sweetening!) and about a tablespoon of Vanilla. I’m thinking about using vanilla beans another time and letting them simmer with the milk, wow! That would be delish!

After stirring in that stuff I put the top back on the crock, wrapped it snuggly in a blanket and placed it in my oven. Oh, before that I had heated my oven to it’s lowest setting. I was just nervous that the temp wouldn’t be warm enough because the weather is pretty cold. So I let it heat for a few minutes then turned it off awhile before I set the crock in there. Then flick on the oven light and let the cultures do their magic!! 🙂 8 hours later I took it out of the oven and had a crock pot full of rich creamy yogurt! And of course I dug in with a spoon right away because I just had to know how it tasted! 🙂 It was about 10pm when it was done, and I decided that the next time I make it I’ll time it so that it’s incubating overnight. That’ll give it closer to 10 hours and help it thicken up more.

Since it was a slightly looser consistency than we generally like, greek yogurt eaters remember? I took Alten Brown’s advice from Good Eats and poured the yogurt into a strainer lined with…. a dish cloth. I didn’t have any cheese cloth, but this worked fine anyway. I’m going to look for LARGE coffee filters this weekend, because I knew they will work well, if not I’ll pick up some cheese cloth. I let it drain for a couple of hours in the fridge and ended up with about 2 cups of whey. 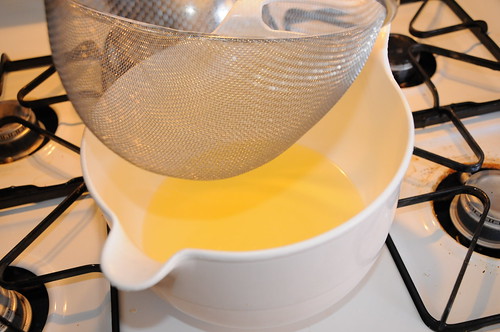 At the time I just tossed it because I didn’t know what to do with the whey. I did/do know that it’s packed with good stuff for you and a very high protein count, but wasn’t sure what exactly that meant for us. Since then though I’ve looked up what to do with it, and there are TONS of uses for the whey. You can make your own ricotta cheese! You can use it in smoothies and shakes for added nutritional value. You can use it as a milk substitute in cooking and baking, even bread! One thing I am going to use it for is to cook my oatmeal in for breakfast instead of water. It’ll add a lot more ‘staying’ power to the oatmeal and hopefully keep me from getting hungry before lunch. But I certainly won’t be tossing it again now that I know. 🙂

Straining it does decrease the volume of your yogurt, of course, but we still ended up with a big container of it. Plenty for our family for a week, and I’ve been eating it for breakfast AND lunch it’s so good. 😉 Myles loves it as well, but Qade has declared that he “doesn’t like the special yogurt.” He’s going through a phase, and since it’s not dyed pink and neatly packed in a little plastic container it simply can’t be good yogurt. 😉 BUT I’ll get him eventually. I have ways of being persuasive. I think my next tactic will be to sprinkle some granola on Myles yogurt and see if Qade can stand to not have any. ha ha ha!! Oh well.

Here’s the volume we were left with after straining. 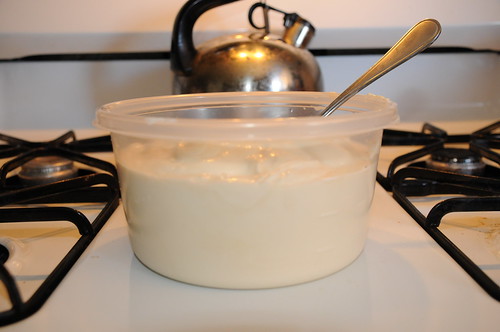 See how creamy it looks! I’m telling you, this is great stuff! Well worth the effort, which really isn’t much when you let the crock pot do the work, and I get giddy just thinking of all the savings!! I made this batch with whole milk, but next time I think I’ll use 2% just to cut down on the fat content. I need to be watching that right now. Ugh! But I know that it’s better for me to eat yogurt to get my “sweet” fix than something else so this is good! 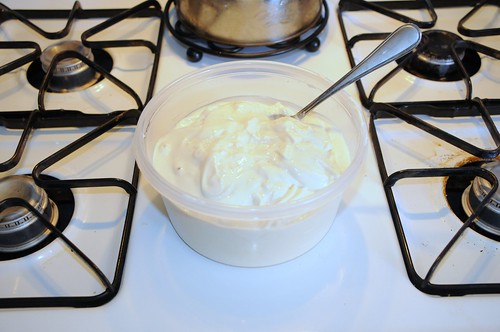 So there you go! My yogurt making success story. I was so sure that it was way to simple to be true that there was no way it would actually work. Ha ha! Guess it’s my good old fashioned pessimism coming out. I’m happy to say though that I was so pleasantly surprised with this venture that I don’t think I’ll be buying any more processed yogurt! Well, except for a plain starter, which runs about $.60. 🙂

You should give it a try!

UPDATE: I no longer use honey and vanilla in the process of making the yogurt. I make it plain and then we add sweetening agents to it as we eat it. Like homemade strawberry jam, or honey or, my favorite, Real Maple Syrup! 🙂 Also, this gets SO easy as you do it. I like to start the crock pot at about 3pm so the whole processes is done by around 9pm and then I let it sit in the oven all night and take it out in the morning. Works fantastic! Plus at this point, I don’t even really “measure” the ingredients any more. I add what I think is about a 1/2 cup of powdered milk, and scoop in aprox a cup of yogurt starter. It honestly is not a finicky recipe and there’s not much you can do to mess it up!