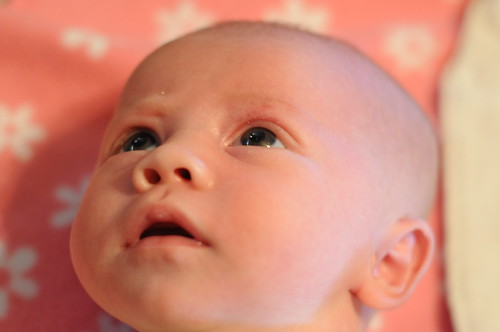 Yesterday was Ella’s one month birthday!! Wow! Time flies when you have to do a portrait every month! 😉 Just kidding! I’m so glad to have the studio equipment that I can use to make our own portraits rather than try to work it out to be near a Sears or Penny’s each month! I haven’t taken it yet, by the way. It’s on my teuxdeux list for next week along with Myles’ 2nd b-day pics! Should be fun fun fun!!!

Anyway, our little love is getting big way too fast!! She’s becoming so much more alert and her floor time consists of lots of gazing at objects around here. As well as plenty of kisses from both of her big brothers! I think they would smother her with love if I didn’t intervene!! 🙂 I’m glad that they are so thrilled with Ella! We all think she is pretty special!

I’m still trying to get some kind of routine going with us. It’s difficult for me because I HAVE to be more disciplined about getting up on time in order to get Ella’s day started right, but it’s been SOOOOO hard to get out of bed in the mornings. Especially on the nights when she fights going back to sleep after her 2 or 4AM feeding. Whew! But I think that it’ll start getting better after this. Sometimes she just needs a couple of moments of grunt/fuss time and then she’s out. Anyway, month 2 will hopefully see the establishment of a good routine. It also will see the completion of her little bedroom! It’s a complete disaster right now. BUT the dresser is almost done, so hopefully after next week I’ll be able to organize her clothes and things, which will make a BIG difference, and the rest will be fairly simple. I hope! 🙂

There was a tutorial on using gradients to make a tinted black and white photo… which doesn’t really make sense, but I did my best to “translate” it to the program I use, just to see how it would turn out. So here it is. Hope you all have a fun weekend! Toodles! 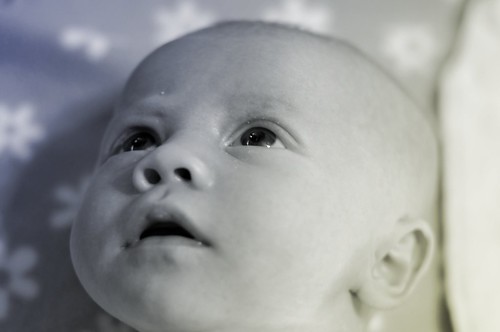 2 replies on “One Month”