My baby is 23 months old. Still “just” one. I forget. In fact, I think I’ve been thinking of this lad as being at least 2 for quite some time! He is such a monkey!! When we bought him his build-a-bear monkey before he was born I had no idea it would be prophetic!! This boy is built like a cannon ball and he uses his muscles very well!

Ever since he was itty bitty and started to sit up on his own (after 7 mo or so, he wasn’t motivated at all before that!) we noticed that his “core” was very strong and that he had extremely good balance! Stu would carry him on his shoulders and the boy NEVER would hang on with his hands. He simply balanced his little self on his perch and looked around like he owned the world. Ha! When Qade was that age, he always had 2 hands full of Daddy’s hair as he “rode” up high! 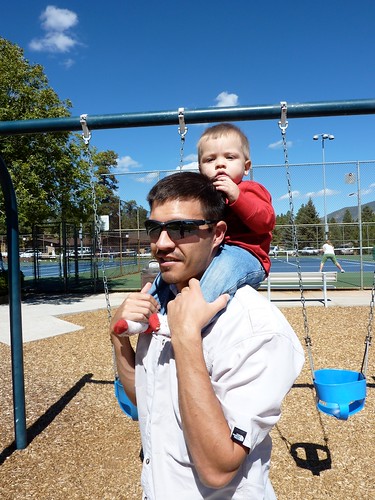 Myles has been climbing things quite well since before this summer. Started out innocently enough with some small chairs/tables/furniture in our house. I remember him being SO frustrated when he couldn’t quite climb onto the couch to follow his big brother. Then the day he finally made it onto the coffee table all by himself, he was so proud! 🙂 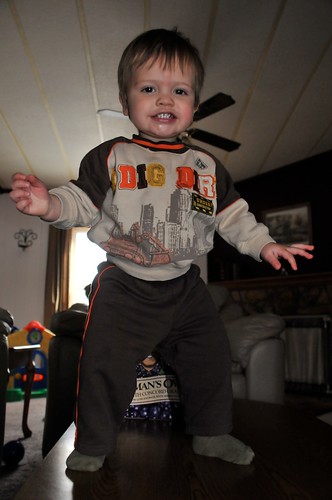 Stairs and a gate… starts out normal enough, but who could tell where it would lead! 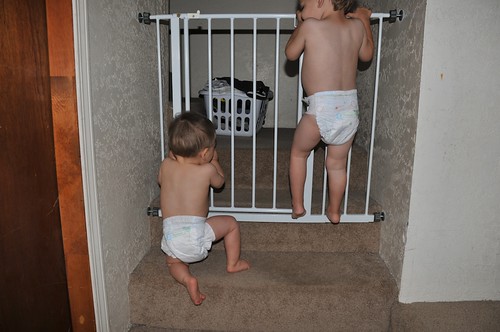 Trying to climb the play house. These photos are all before he was one or walking. 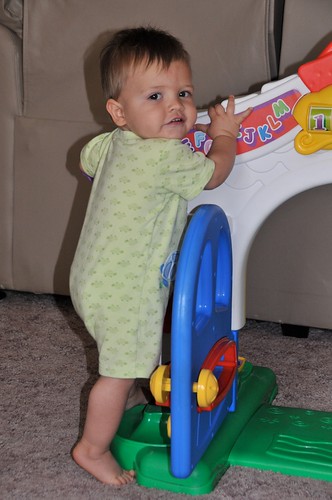 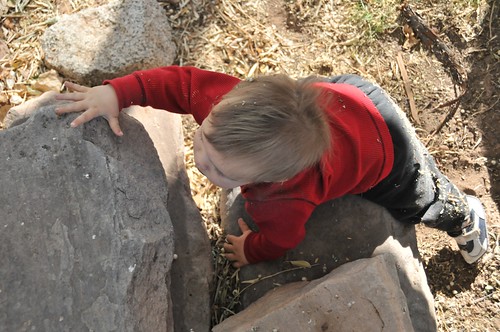 Yay, he made it onto brother’s big-boy bed!! Woo-hoo!! 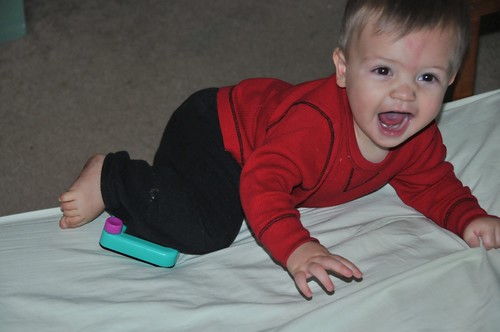 Found him in this wobbly chair which he had climbed into all by himself. He couldn’t figure out how to get down, but he thought he was big stuff for getting in there! 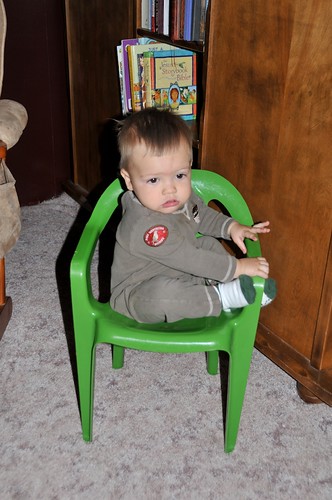 Once he did turn one, the climbing continued to get more aggressive! He doesn’t have even the slightest fear of heights!

Climbing park equipment. This was before he was walking on his own. 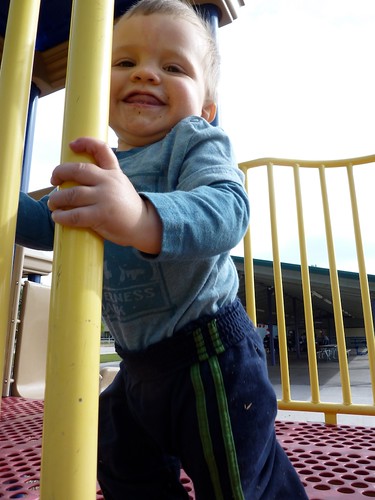 More park climbing! Qade was walking very tentatively over this stuff. I think it was because you could see through it too the ground, but Myles was having a blast! 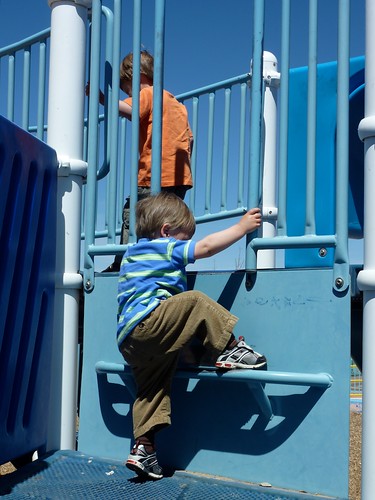 One of Myles favorite perches. My computer desk stool. He especially loves to sit here when they watch one of their “shows.” Ha! Personally I find the couch much more comfy! 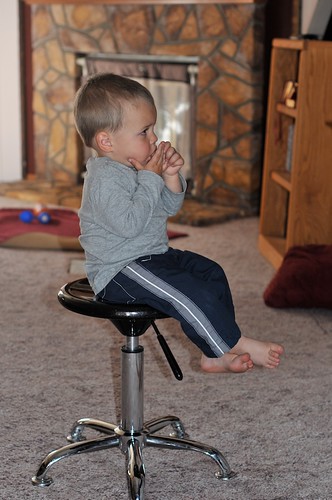 This is not very high, but just goes to show that if it looks like it can be climbed, he is going to climb it! This was our picnic at Big Lake this summer! 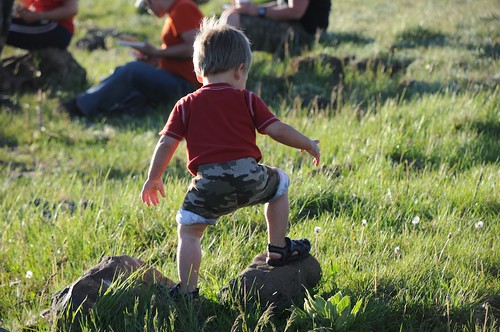 And another climbable rock! 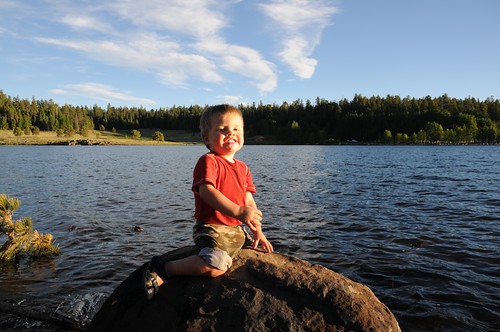 As soon as we got the play set, he was scrambling up the ladder and hanging from the top part. 🙂 It humored me, but frightened others who aren’t used to such a young monkey. That boy’s arms are amazing! His dad hoists him up to the pull-up bar and Myles will pull himself up complete with tucked up legs! I just can’t believe how sturdy he is!!

Of course he has had his casualties as his poor little face can attest. The splinter incident was awful!! Then the head gash and ER incident was also less than fun. His little arms and legs generally have little scratches or bruises where his “boyness” shows through. Despite all of that though, it hasn’t dampened his love for climbing! This weekend I took some shots of him climbing a juniper tree near our house. Both boys love to climb in it, but Qade is generally content to stay close to the trunk of the tree and the ground. Not so our little monkey!

Here he is just starting out. And yes, he did ALL of this all by himself! 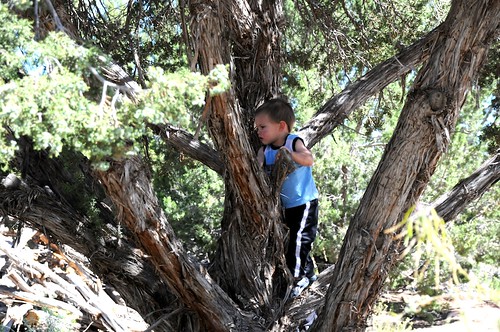 Scoping out a higher route! He’s quite confident he can do it! 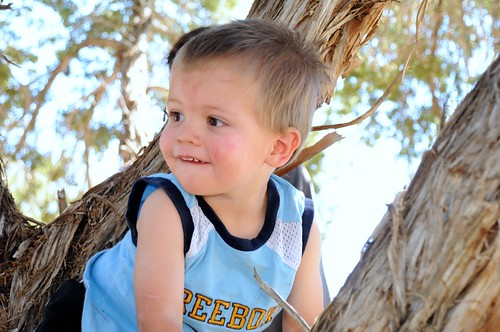 A little stretch here, a little grab there… 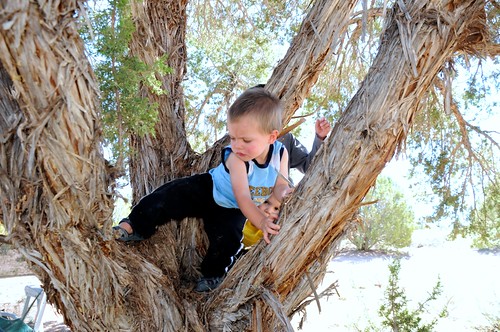 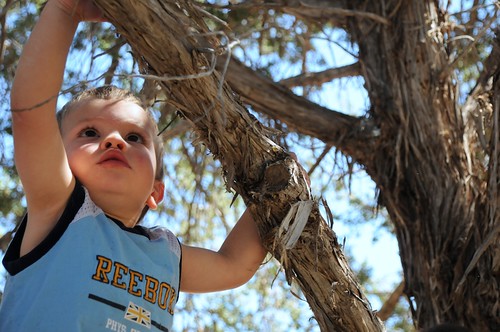 Check out the spiderman moves! 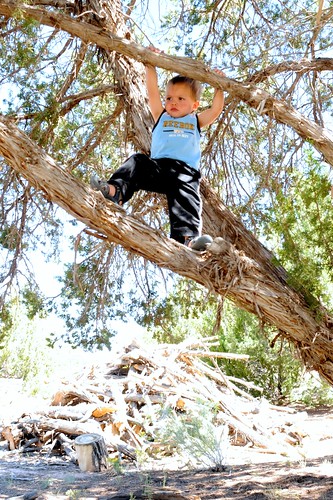 Loving the view! While he picks the juniper berries to throw at Mommy. 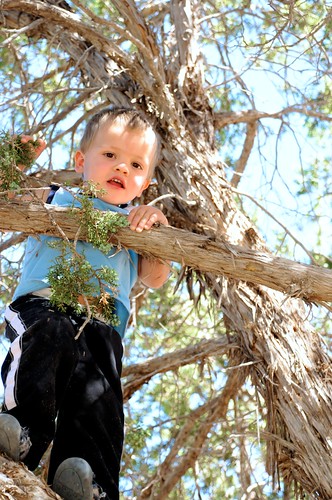 And lest you worry, Daddy was there spotting the whole time! We do have a monkey, and he does do well on his own, but even though it seems like he’s not just one, we remember that he still is! 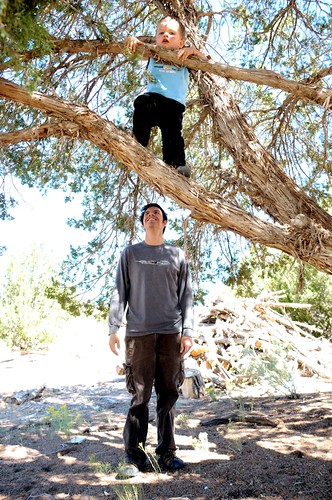