Well, there were plenty more memorable hikes after that one. We hiked to the meadows and Rocky Point more times than I can say, and let me tell you that it is CREEPY to hike the “back way” to Rocky Point in the dark! We hit the Meadows and went the opposite direction up Muddy Creek once and found some pretty cool canyon like hiking. We hiked the Flat Tops, and Fish Creek Falls. We climbed the tower on, oh I can’t remember the name of the ridge. Buffalo something maybe? That was fun! 🙂

On all of our hikes we’d just talk about “stuff” nothing intense or anything because well, he had a girlfriend. 😉 But we did get to know “the real us” because there wasn’t that ‘performance pressure’ associated with dating that I mentioned before. We were just being pals and having a lot of fun together. Sometimes we talked about our ideas about dating, because I had told Stuart that I was done with it. My philosophy was that you could get to know people in a much more “low stress” way by developing a friendship, and then if that blossomed into something “romantic” then it was fine, and if it didn’t then no big deal, you still had a friend. Well, he was rather skeptical of this line of thinking, and began to call my ideas the “Buddy System 2.0” ha ha ha ha! He’s a computer guy, what can I say? 🙂 He didn’t agree with my ‘system’ because he thought then, as he thinks now, that it’s IMPOSSIBLE for gals and guys to be “just friends” without one or both of them becoming “interested” in the other. I told you we had a huge conversation about this with some friends of ours, but before that we talked about this subject repeatedly on our various fun adventures and rambles. He was trying to persuade me out of thinking like I did, but that wasn’t going to happen because of my previous dating experiences. I didn’t know why it should matter anyway, it’s not like dating hadn’t worked for him. Or so I thought…..

One week in that last summer was especially different because it had such low numbers that a lot of staff weren’t necessary. Stuart and I both got permission to leave camp to visit our families. That in itself I still can hardly believe because we were both team leaders! Weird! But it worked out for me drive down as far as Stuart’s house with him and then my brothers would come pick me up. See, I had a run in with my car and a deer… neither one did very well after that, so I “needed” a lift. 😉 The drive down was a lot of fun! We stopped at some steak place for dinner, and Stuart bought me a meal!! Ha ha ha! Should have tipped me off, but I just shrugged it off and said I’d get the meal the next time. 😀 We had this CD that we listened to all the time that summer. It was a King’s Singers one that I had from somewhere, and it had a bunch of random songs like the “Circle of Life” song and “Kissed by a Rose” among others. We would laugh at the random lyrics of the songs and “philosophize” about what it all REALLY meant. I still love that CD even though it’s not one I listen to often. I met Stu’s family again, I had already met them once before that summer. My brothers made it up to get me and we spent the rest of that week apart.

I got daily phone calls from Stuart while we were at our homes that week!! 😀 My mom kept asking me why in the world he was calling me. I kept shrugging it off and explaining it away that he was bored. Plus he told me that he’d tried several times to call his girlfriend and could never get ahold of her. Hmmmm….. guess he wasn’t too persistent with that.

I went up to Pagosa a day before we had to be back to camp so that we could do some hiking. That was Stuart’s idea, but I thought it was a pretty good plan! We hiked to a place called 4 Mile Falls, it was great! Except I had new shoes and got blisters, but it was well worth it! Then we drove out to a great look out over Piedra Canyon. I love that area! There are so many lovely spots!! I didn’t know it at the time, but that overlook would come back into “our story” again in a very important way!

Some photos from that trip. This is an overlook on the way down the pass to Pagosa. 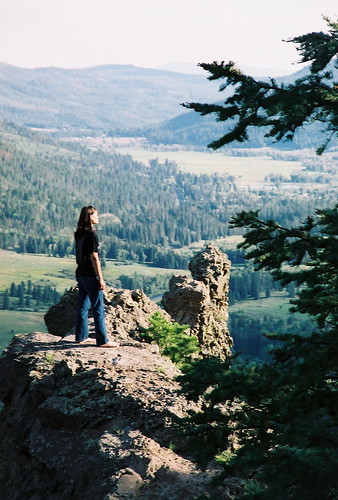 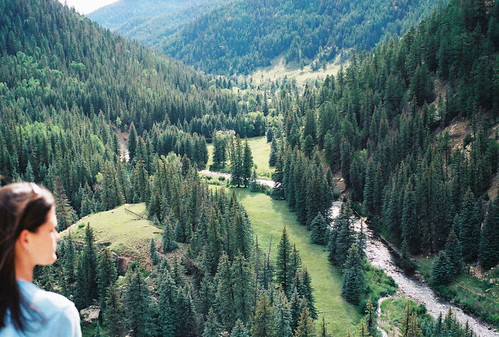 Stu took both of these pics. This was before we were in the “digital” age of cameras, so forgive the quality.