Summer 2004 began with a bang! As in, I got sick almost right away. Bah-Humbug! So one of the very first weekends of camp, while I was recouping from my cold, a small group of us decided to hike to Muddy Creek Falls instead of go to an activity in Denver. There was almost no one left on camp that weekend, but the 6 or so of us who took the hike. It was a TON of fun! I still wasn’t feeling 100%, but was well enough to thoroughly enjoy the day! Stuart was on the hike too, and besides a quick detour to call his girlfriend from the Meadows, he was pretty entertaining the whole time. This is a shot from that day. 🙂 We are actually standing on a ledge right above the falls. 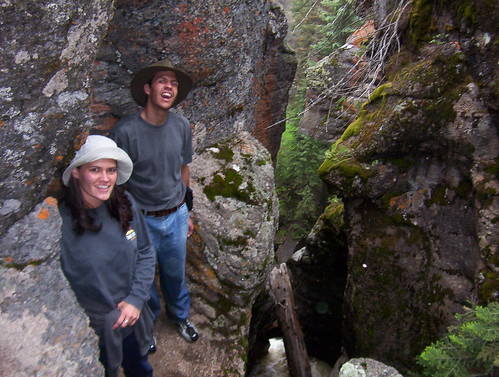 I had never been to that waterfall before even though this was my 4th year working at TWR! So glad we went, and since it was the beginning of the summer, the creek was still REALLY full from run off. Awesome!

As the summer progressed we starting hiking a lot!! In fact, not long into the summer we were all informed that TWR would not just be moving locations, but would actually be closing permanently. 🙁 That was a very very sad day for a lot of people, but it did make me determined to enjoy every last bit of it. That meant that I wanted to hike all around and see all the sights rather than spend my weekends in Denver or Silverthorn shopping and going to Six-flags. Stu felt the same way, so while we began hiking in groups, it ended up dwindling down to just he and I being hiking buddies. 😀 And while we hiked we talked. Not constant chatter, because we were comfortable enough with each other that silence wasn’t awkward, except once and I’ll tell you about that later…

Probably the first really memorable hike was when a group of us went to a tiny church near Grand Junction and on the way back hiked Hanging Lake. I had hiked it before when I was really young because we used to live right in that canyon. Beautiful beautiful spot!! The hike was awesome, and even though there were a lot of people hiking with us, Stu somehow managed to not ever be really far away. 😉 It was on that hike that I noticed that somehow his questions and conversation seemed “different.” Always before we were more “just business” kind of bro/sis counselors, and even though we were friends, our joking and conversations pretty much stayed on the surface level. This time though I distinctly recall thinking that his questions seemed more personal. Not in a weird way, but like he was really trying to get to know “the real me.” It was kind of strange, but I just laughed it off to myself. I figured that with camp closing and all people would be nostalgic anyway. Stuart had a girlfriend. One whom he had “casually” mentioned about a million times to EVERYONE at camp, me included, and who as far as I knew, he was planning to marry! That was what kept things “safe” for me. Cause like I said, I was done with dating. I was very willing to develop friendships, but no way jose, to the dating thing. So as far as I was concerned I could be “buddies” with Stuart safely because there was no danger that he’d be interested in me!

It was while we were sitting and waiting for the rest of our group to come down from Hanging Lake, (we beat them all because we ran down, crazy!!) that he struck up the topic of Camp On Wheels. This was a camp idea that Stu’s home pastor was trying to get going once he learned that TWR was closing. Stu was already determined that he was going to work there the next summer and was trying to convince me that I should as well. I put the breaks on and said, “Wait a minute, I thought you said you were getting married next summer!” My mind can take me back to those moments when we were talking. It almost seems frozen in time. I can nearly hear the sounds of the cicadas in the trees, and I can recall the shadow of the canyon wall across the dammed up river. The cool smell of the water, and the breeze blowing through the few trees, bugs and birds flitting across the surface of the river. The sunlight high up on the canyon, and the cool shade where we sat at one of those rubber covered picnic tables. I can still remember his reply to this day, “Well I might or I might not, but either way I’m working at camp!” 🙂 Ha! Guess what, he DID get married the next summer….

But I’m getting ahead of myself.