Sorry to have neglected y’all for SO long. I’ve got a post “brewing” but I’m not quite ready to write it yet, and unfortunately it had been effectively blocking all other blogish thoughts. 😉 I know, I’m weird.

Anyway, it has been busy too so I’ll let that and my project sons be my excuses. 🙂 Ha ha! Here they are… look so innocent don’t they? 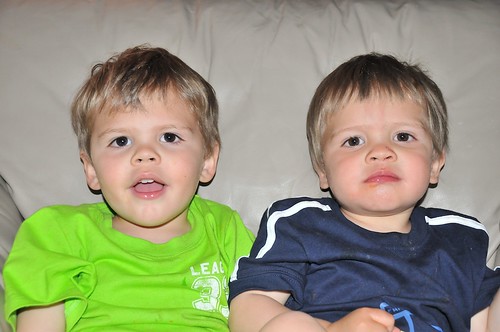 Don’t be fooled! My two older children have been doozies in the behavior realm lately! It’s all part of that brewing post that’ll maybe be done steeping sometime soon. No worries, you’ll get the full scoop, probably more than you’d like, before long. I would just like to take this moment to say that my youngest child (still of unknown gender and thanks to a doc who is NOT as impatient as I am, will remain so for more than another month! What in the world!!!!) has been on it’s best behavior! 🙂

However, between the doozies we’ve been doing okay. We’ve had lots of fun moments outside where life becomes easier for all involved, and where this Mommy is SO happy for the sunshine and warmer weather!!!! The potty training is still going… and going…. and going… but no poop yet. 🙁 If you have any fool-proof suggestions for how to get the little stinkers to actually “stink” while on the pot, shoot em my way! Qade will talk about it. He’s super excited that once he does finally “go” he get’s a toy, and he tells me that fact frequently. I make him clean up his own messes when he goes in his unders, and he’ll agree quite loudly with me that it’s “gross” and “disgusting” (even though I’m pretty sure he only says the last word because he thinks it sounds cool), but it doesn’t seem to sink in that he could do something else about it. *sigh* Well for now we’re just going to keep talking about where it really goes, and hoping that sometime it’ll happen. I’d really rather not resort to sitting in the bathroom w/ him on the pot for however long it takes listening to him whine the whole time. So, here’s hoping…

Today marked the day when I finally decided that the mops HAD to be dealt with. I actually kind of like my lad’s hair a little mopish and longer. I think it’s cute. But after they’re cut I think they’re so stinkin’ cute too!! I bought some clippers at good ol’ Wally-World a couple weeks ago hoping that it would help me do a better job. This one comes with color coded combs that help you know how long/short you’re about to cut it. 🙂 I have to say that it really did help. I managed to get them shorn and it wasn’t so bad. 🙂 Now it would have been better had they not been squirming all over and fussing about the hair flying all over their suckers, but I’ll take what I can get. The end results aren’t TOO bad anyway. 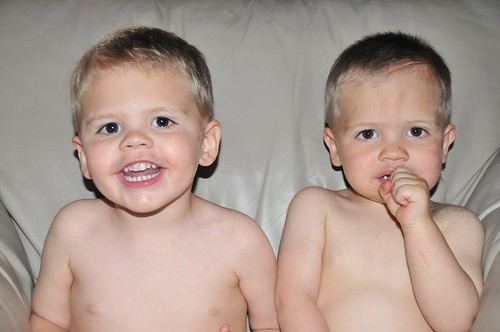 They seem happy enough although they were still covered in hair! Ha!! Don’t worry, right after this shot they both got plunked into the tub suckers and all. 🙂 Hey, I liked the way it all turned out. If you’re going to get all sticky from a sucker and then hairy from a hair cut, you might as well get unsticky and unhairy while you have fun splashing in the tub and finishing up the sticky treat as well. 🙂 I think I’ll have them eat popsicles in the tub next time too!

So this was supposed to be Stuart’s turn to chop the mops but he’s been pretty swamped lately with stuff to do so I took it upon me to make one less thing on his to-do list. Plus this week is Qade’s 3rd birthday!! So we’ll be having lots of family and fun around here. Wanted the lads to be presentable instead of shaggy… of course it was a gamble either way with my hair cutting skilz! 😉 I have to say though that after doing just the 2 of them, my back was killing me!!! I have a new and deeper respect for those people who stand on their feet all day and do this. Course I wouldn’t mind getting paid. I did all the work and still had to dish out suckers! Ha ha!

That’s it, folks…. all for now. I’ll try not to be so negligent about blogging and I promise to post some b-day pictures too! Take care!

3 replies on “Shearing of the lads”