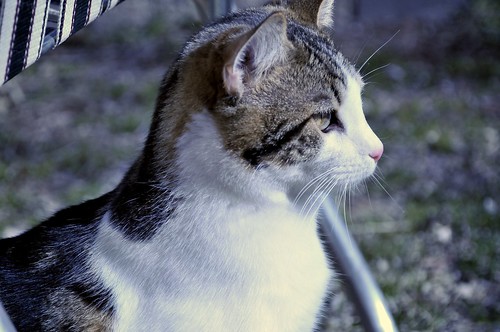 I never in my life would have thought that there could be a difference between a “country cat” and a “city cat.” Our kitty, Liam, however is making me think twice about it. The last cat we rescued was local, and very young as well. This time, it seems that our cat obviously grew up in the city. Now I’ve seen cats about in the city and watched them walk along walls and climb fences, so it never occurred to me that they might not “know” how to climb trees. I mean, that’s just a cat thing right? Like it’s instinct or something. Guess not. Here’s what our poor cat has been learning… the hard way!

The first day he was allowed out of the house while the lads were playing outside, I noticed that he would run up to the trees as if he planned to scale them only to pull up short at the bottom and look WAY up at the tree. I didn’t really think much of it cause I figured he was just trying to figure out his turf. Well several days later he was left outside to explore on his own. I saw him on the front porch which has a deck on top. He was trying to climb the posts up to the deck. He’d leap up and grab the post only to slide down it like a cartoon!!! I admit… I did laugh.

However, he later successfully managed (somehow) to get to the roof and there he was stuck. He couldn’t for the life of him figure out how to get back down. Now keep in mind that there is a tree growing right next to the carport! He would only have had to take a step of about 5 inches to get to a very sturdy branch that he could then climb safely down. This was too much for him though and I happened to be standing at the kitchen window when I saw him LEAP from the carport roof to the ground down below… only it wasn’t the ground it was the sidewalk! Ouch!! Maybe he’s just not too bright.

Kudos to the cat though because he is indeed trying to master some of these skills that it seems nature forgot to give him. He kept at it with the tree climbing and went from simply staring at them to leaping up and sticking in one spot! Ha ha ha!! Seems he couldn’t figure out how to get beyond that. Cisco helped him get some motivation one day though, and he leaped up and actually climbed into the tree!! Getting him down now is still another story.

The other day when I took the lads out to play, Liam again made it up one of the trees. He seemed so proud of himself and commenced to explore the branches. I get more chuckles out of this goofy cat than should be allowed. Cats are not, after all, usually laughable critters. But to my surprise Liam actually FELL out of that tree!! Somehow he got out on the smaller branches and just flipped over!! Honestly now, have you EVER known a cat to fall out of a tree? 🙂 It makes me smile just remembering all of these silly antics. OH, and don’t worry he landed on his feet! 😉

The things he has been doing that do not amuse me are when he decides he wants to be in my lap. He leaps up and catches hold with his claws on my arm or leg or tummy… whatever happens to be available to hoist himself up! This does not thrill my soul and it doesn’t make me very willing to be his cushion either. Eventually he’ll figure out my lap is not a safe place to jump to. Besides it’s prime real-estate these days. The lads both like to sit on me to read stories, and my fat belly is going to be a problem before long. 🙂 No cats invited!

So do you have any funny animal stories? I’d love to hear them. I’m always up for a laugh!! 😀

One reply on “City Kitty?”